Decorator Natalia Maslova does not like half measures. The owners of this apartment planned only to update the interior. And as a result, they demolished all the walls and rebuilt them. This project was first published in ELLE DECORATION in March 2017 and was included in our “Golden Collection” 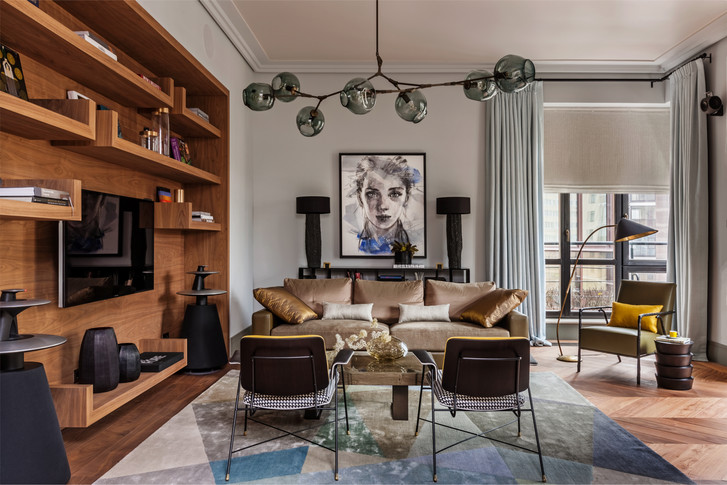 Living room. Sofa and armchair with bronze legs, Christian Liaigre. Chairs Bauhaus, Baxter. There is a Crystak carpet on the floor, designed by Jurgen Dahlmanns, Kover Byro. The shelves, console and table are made according to the designer’s sketches. Chandelier, Lindsey Adelman. Natural Walnut Floor, Ebony & Co. On the wall is the work of the Belgian artist Christine Comyn.

Having lived for ten years in an apartment located on Starovolynskaya Street, the owners decided that it was time to change the scenery and update the bored interior. Initially, nothing radical was implied. However, the decorator Natalia Maslova immediately appreciated the potential of the apartment, hidden behind the wrong layout. “On the one hand, there were undeniable bonuses: French windows, high 3-meter ceilings, an incredibly beautiful view of the ancient linden alley. But at the same time, not a single right angle!” she recalls. Thanks to the redevelopment, it was possible to create not only harmonious, regular-shaped rooms, but also to build two enfilades.

Dining area. Table and chairs upholstered in linen, Meridiani. Vases, Michaël Verheyden. On the wall is the work of Vitaly Pushnitsky “Point of View” and a floral panel, designed by Larisa Kravchenko. The chandelier is made according to the sketches of Natalia Maslova.

“I convinced the owners to abandon the balcony in the living room and attach it to the room. As a result, we have a breakfast area with almost panoramic glazing, — says Natalia. — Agree, what could be better than to admire the spreading crowns without hindrance over a cup of morning coffee.” By the way, it was the views outside the windows that determined the color scheme of the interior: gray-green shades of the trunks of old lime trees interspersed with greenery and sky blue. Natalia managed to create a space that feels calm and at the same time elegant in its embodiment, in which the atmosphere of Parisian houses is clearly captured. 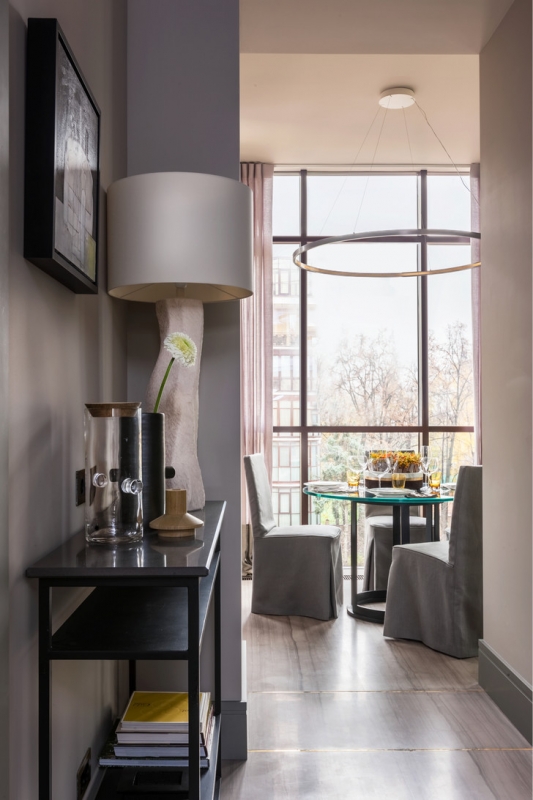 View from the kitchen to the breakfast area. The console and table are made according to the designer’s sketches. Chandelier, Le Deun. The vases are handmade French ceramics.

Silk, velvet and the finest handmade Venetian cotton added a special comfort to the interior 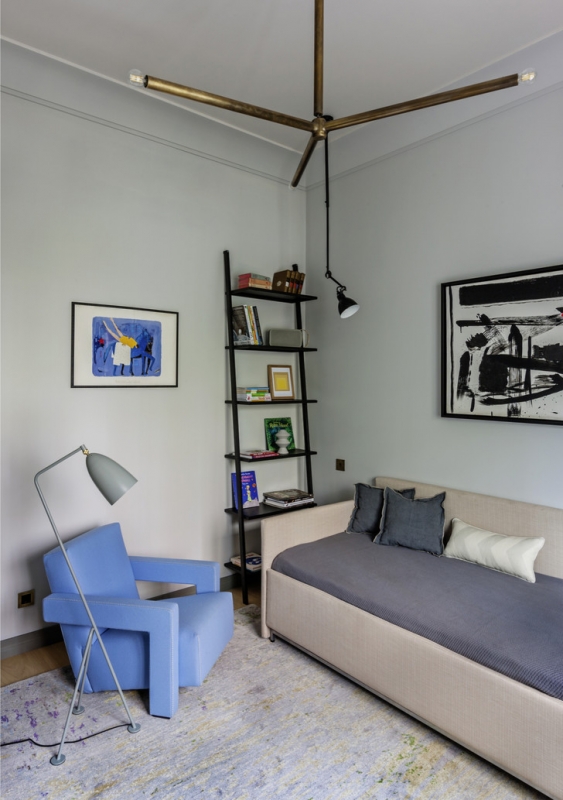 My son’s room. The shelves and chandelier are made according to the designer’s sketches. Armchair, Cassina. Floor lamp, Gubi. Carpet Art Work, design by Jan Kata, Kover Büro. Bra, Grass.

Almost all the pieces of furniture are modern French classics, where Christian Liaigre has the first violin. Textiles and expensive finishing materials — raw silk, velvet, the finest handmade Venetian cotton, natural marble, brass inserts on the doors and the floor made of matt walnut give a special comfort to the rooms. 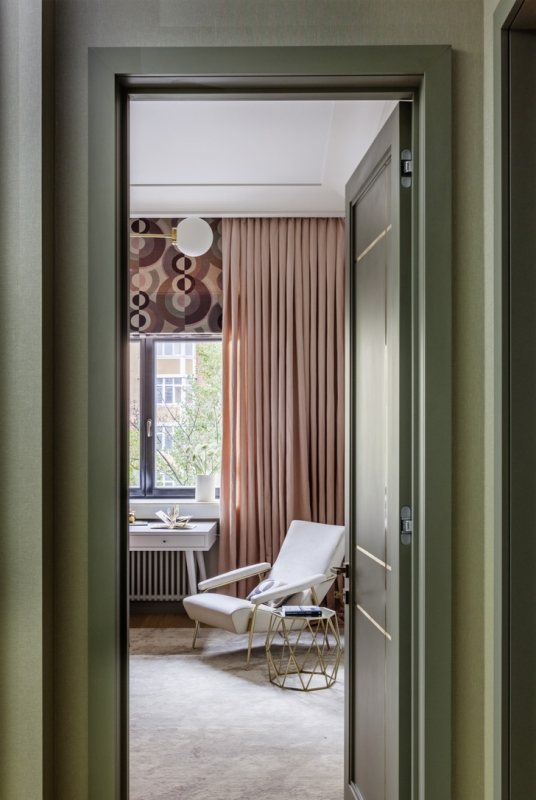 Daughter’s room. The table and chandelier are made according to the designer’s sketches. The chair, Gio Ponti. Marble carpet, designed by Michaela Schleipen, Kover Büro.

However, the main style-forming element and the starting point for creating the interior concept were art objects. “I start each of my projects by selecting a painting that sets the tone and creates an image of the future interior,” the designer admits. Paintings for this project were collected all over the world. Here you can see the works of Vitaly Pushnitsky, Christine Comyn and Patrick Palmer. “Art is the mood of the house, what fills it with soul and life,” Natalia is sure.

Most of the pieces of furniture are modern classics, where Christian Liegr has the first violin 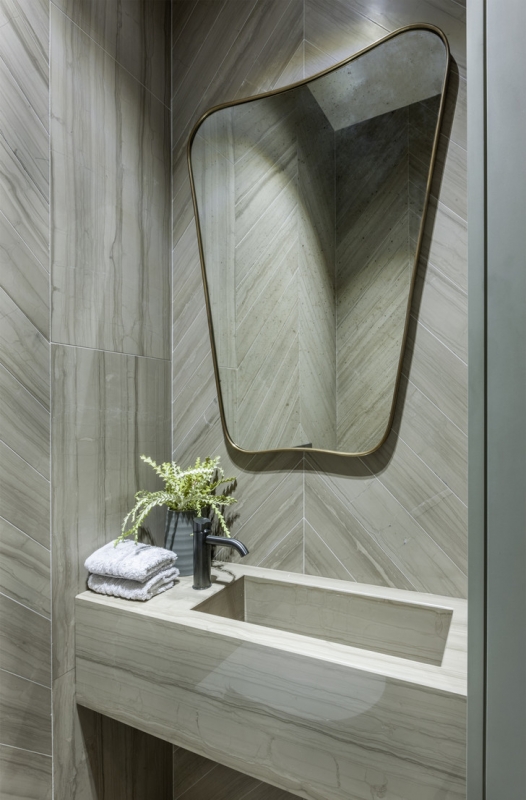 Guest bathroom. The sink is made according to the sketches of the designer from striato elegante marble. They also lined the walls of the room. Faucets, Cia. The mirror is an antique.