Russian decorator Albina Nazimova told Alexey Dorozhkin about the house in Spain, which she designed to spend holidays with her family. It was first printed in ELLE DECORATION in May 2013 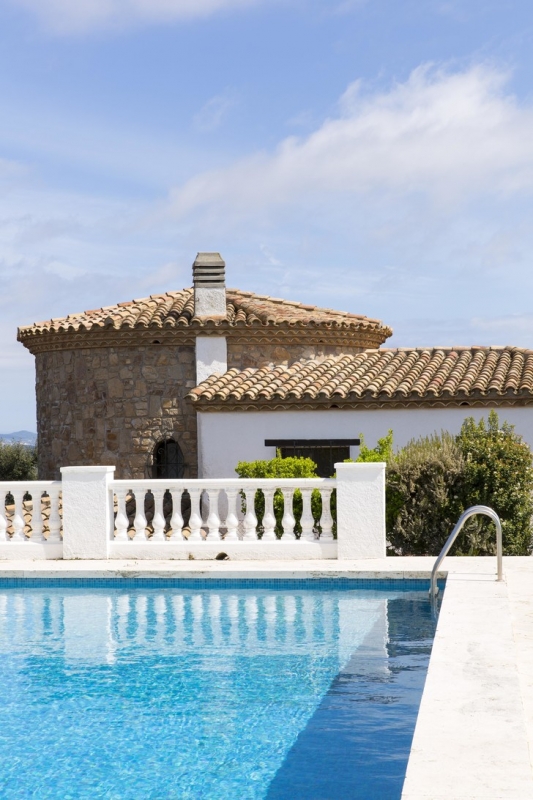 A fragment of the facade of the house and the pool. 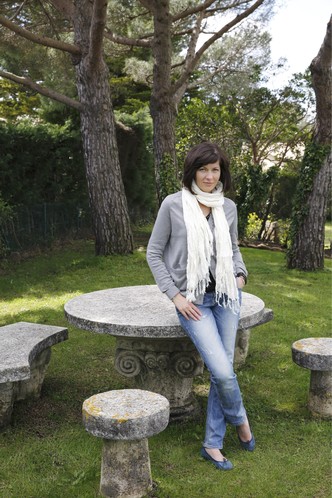 My acquaintance with Albina Nazimova began quite officially. A couple of months after I became the editor-in-chief of ELLE DECORATION and dealt with urgent matters, it was time to get acquainted with decorators. For obvious reasons, the phone of her bureau was one of the first on the list — she started doing interior design long before the word “decorator” came into our vocabulary. I called and immediately received an invitation: “You are the first editor who wants to talk about his magazine. It’s interesting, so come right today.”

My intentions to tell one of the most famous decorators about our news were dispelled ten minutes after we met. We sat for several hours looking at art albums, photos from trips and generally didn’t talk much about work. I will take the liberty to say that since then we have been just friends for three years. Albina has become for me a real arbiter of good taste, and not only in terms of decorative art. 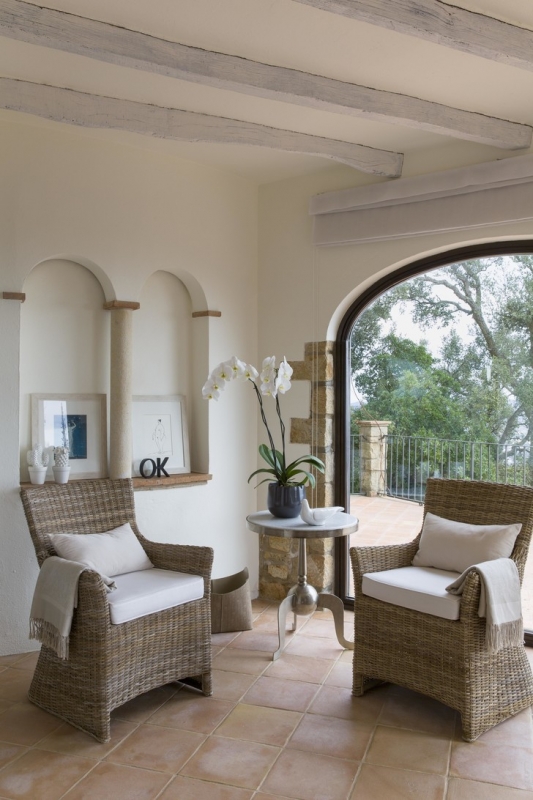 A fragment of the dining room on the first floor. Wicker chairs and a table, Becara. The niche exhibits graphics by Russian artists. 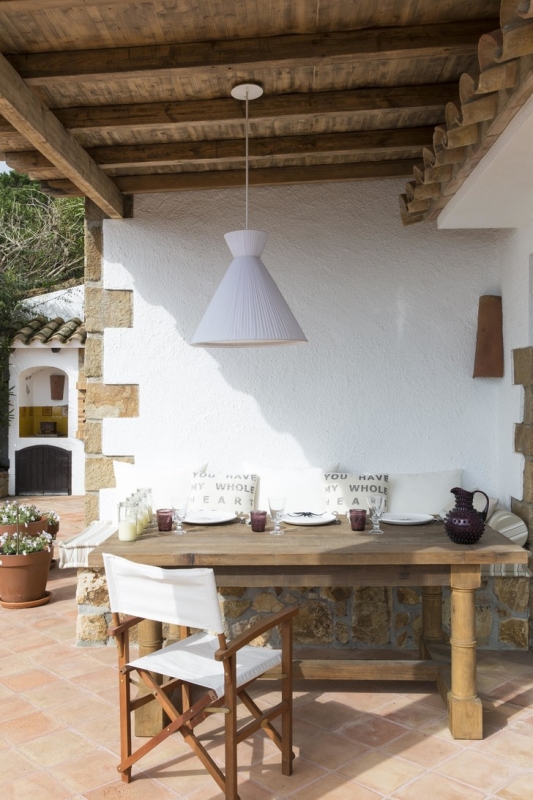 Terrace. The table and chairs were bought at a local store. There is a mattress and pillows on a stone bench.

We exchange news of design exhibitions, make trips to flea markets in search of treasures, share impressions about travel, new, always interesting acquaintances and, of course, we can talk endlessly about interiors. Our telephone conversation often begins with the question whether I have seen this or that house in Moscow, Paris, Barcelona, Tuscany, Sweden or somewhere else. “Haven’t you been there? – she is surprised. — You definitely need to see — it’s really beautiful. By the way, my friends live there, and we can come to visit.” Every time it hits the spot.

However, Albina herself almost does not undertake the design of private interiors. “It’s hard work—” she says. – You need to know the customer very well. It is difficult for me to explain to a stranger why his house should look exactly as I suggest. Therefore, I prefer to work with public spaces where interference in the personal sphere is minimized. The exception is my close friends, but that’s another matter. I can’t call it work (we’ve known some of them since childhood), rather friendly advice.” 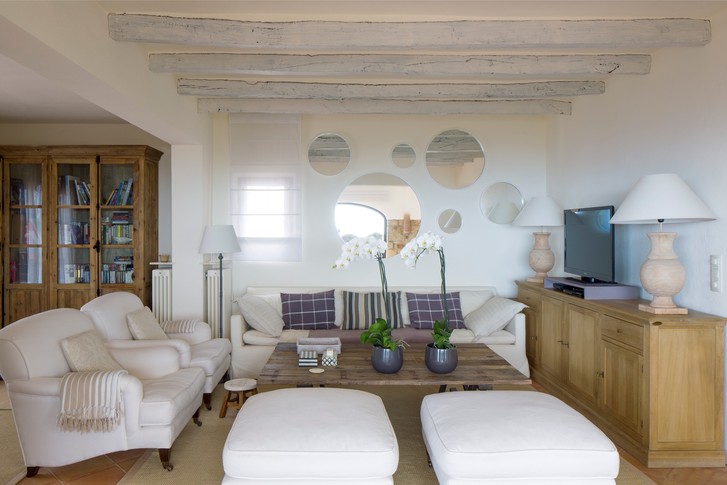 The first floor of the house is a single space consisting of a living room, a kitchen, a dining room and an office separated by wall projections. Upholstered furniture in the living room and lamps with a wooden base, Becara; chest of drawers on the right, Basic Line; round mirrors of different diameters on the wall, Branco sobre Branco.

“We whitewashed the walls, brought simple furniture — and the ostentation of the interior immediately disappeared” 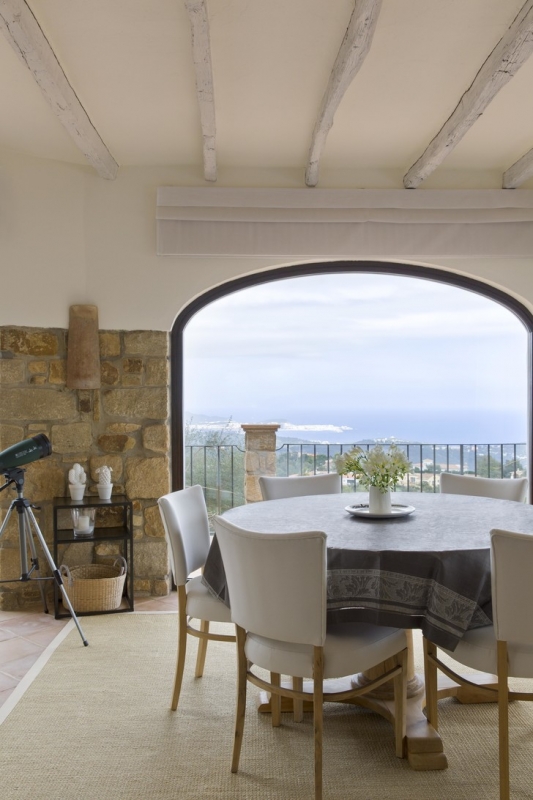 The dining room offers stunning views of the Mediterranean Sea. Table and chairs, Indian Pacific. The linen tablecloth was brought from Moscow.

But, of course, the best thing about the decorator’s style is the house where he lives. I have been watching the evolution of the interior of this Spanish villa over the past year from photos on an iPad and periodic trips to the markets for all sorts of vintage trifles. Russian Russian homes abroad are the best example for our special issue — Spain has become the same Russian resort as Germany in the XIX century. The villa on a high hill above the sea is a kind of declaration of love for the place where Albina and her family have been spending holidays for a long time.

The first step was a small apartment on the coast, which she rented from year to year, but the charms of direct access to the beach were largely devalued by the noise of the resort town, especially in summer. Therefore, it was decided to move to one of the hills located above the bay. The sea can be seen even better from here, and the silence is only occasionally broken by the raids of wild boars living in the cork forest around the house. “This is probably the only inconvenience!” – the hostess smiles. 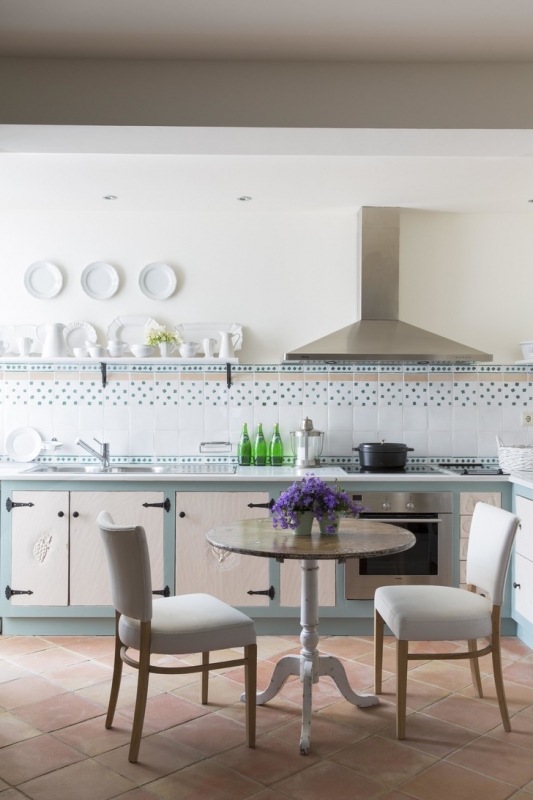 Albina decided not to change the kitchen, but simply to repaint it. Tiles and furniture have been preserved since the construction of the house.

“Russian interiors often look emasculated, as they are created from scratch. That’s why I haven’t changed much here.” 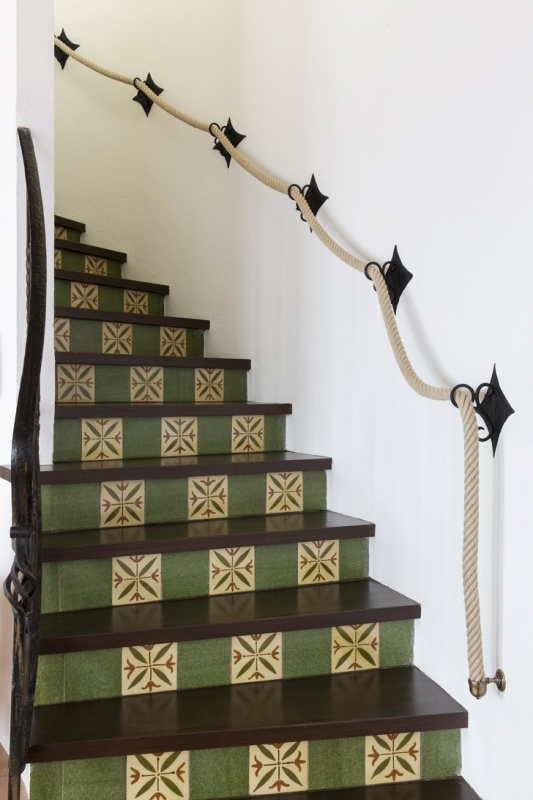 Stairs to the second floor. The decoration has been preserved since the 1970s.

After a long search, a villa was finally found, which was rented for a long time — a rarity for this popular place. The house was built in the 1970s in the traditional style of Spanish resorts – plastered walls and rough stone. However, its owners – a family from Bavaria – added German rationalism and kitsch. “They probably understood that, so I had carte blanche. At first I wanted to make a completely new interior here,” says Albina. — I was terribly annoyed by the deliberate “rusticity” in the best traditions of those years: a fireplace lined with sandstone, vaulted ceilings made of open brick and built-in furniture in the country style. But then I thought that often our Russian interiors look emasculated precisely because they are created “from scratch”, even if it is done in a house a century ago.” 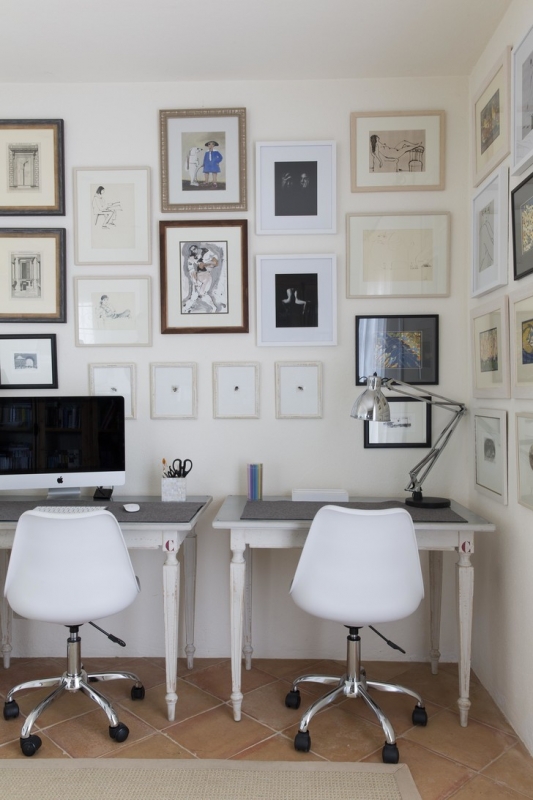 The office is on the first floor. The old kitchen tables have modern office chairs. On the wall is a collection of graphics and photographs. 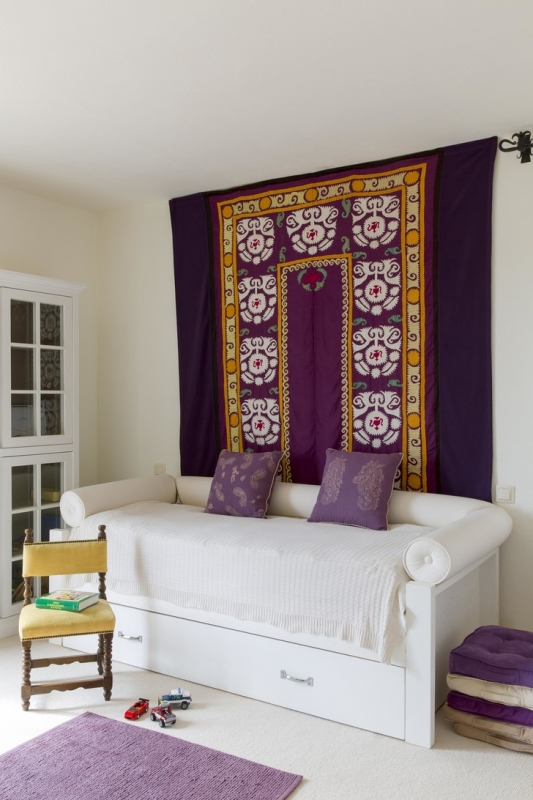 Childish. Couch, Indian Pacific. Suzana on the wall is a gift from friends.

“Gradually I came to the idea that I need to limit myself to minimal alterations: where is the guarantee that in five years I won’t get bored with modern furniture in the same way I didn’t like the finish of the 1970s? And if ever we decide to move to another place for the summer, let the future tenants get something from me.

The owners, at my request, left a few chairs in the style of a pseudo-biedermayer forty years ago. Their bright upholstery and mahogany are few color accents in this house. However, recently in Istanbul, a yellow-gold suzane was bought to match them. I re-painted the rooms white – and all the ostentation of the interior disappeared. Then my husband and I moved simple furniture into the house, partly bought in the surrounding shops, partly at flea markets, and the kitchen was simply repainted.” 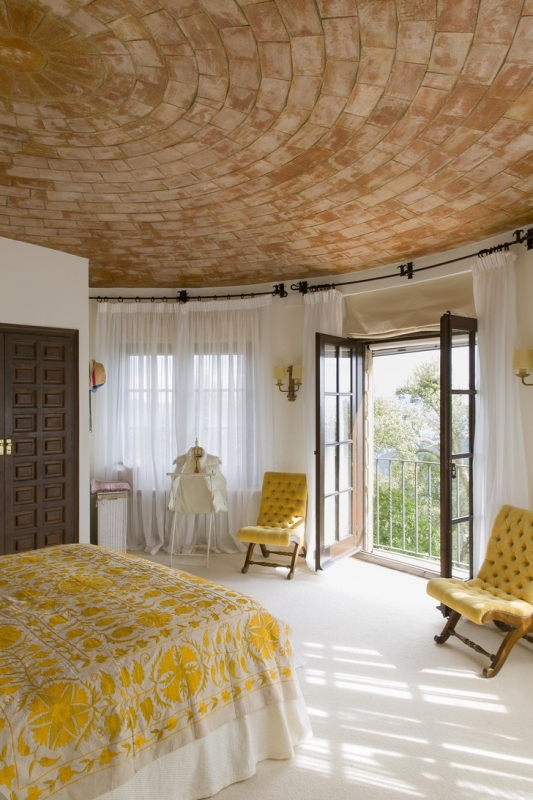 Bedroom. The bed is made to order. Part of the works from the collection of Albina Nazimova is placed above the headboard. Bedside table, Becara.

“The paintings on the walls are gifts from friends or works by local artists. Inspiration for the house here can be found everywhere: in the interior of a nearby restaurant, which actually turns out to be a Michelin institution; in the way chairs are displayed in a cafe by the sea, in what color the fishermen’s houses are painted. The house continues to live its usual life — I am sure that the owners also spent evenings with cold wine and grilled shrimp twenty years ago. Finally, when all the things took their places, friends gave us a small model of the lighthouse – a traditional Spanish housewarming gift. However, this does not mean that tomorrow a fresh wind will not blow from the sea and the interior will not sparkle with new colors.” 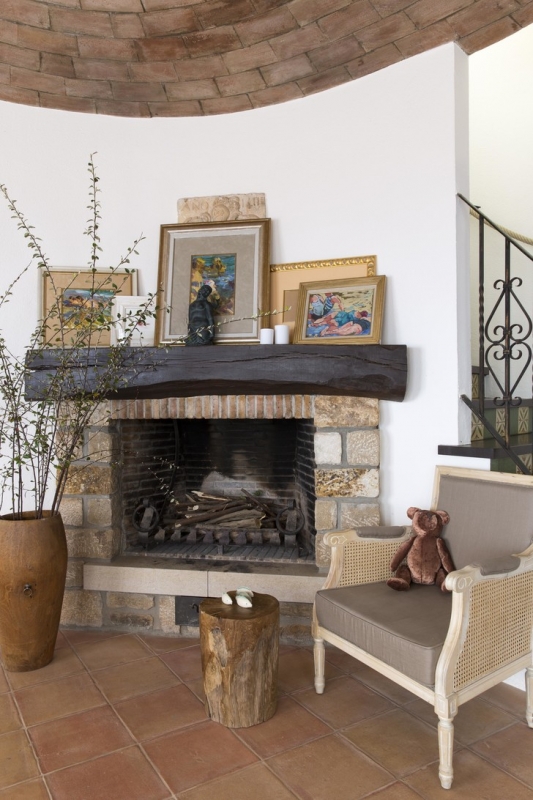 On the mantelpiece in the living room there are works by local artists and gifts from friends. 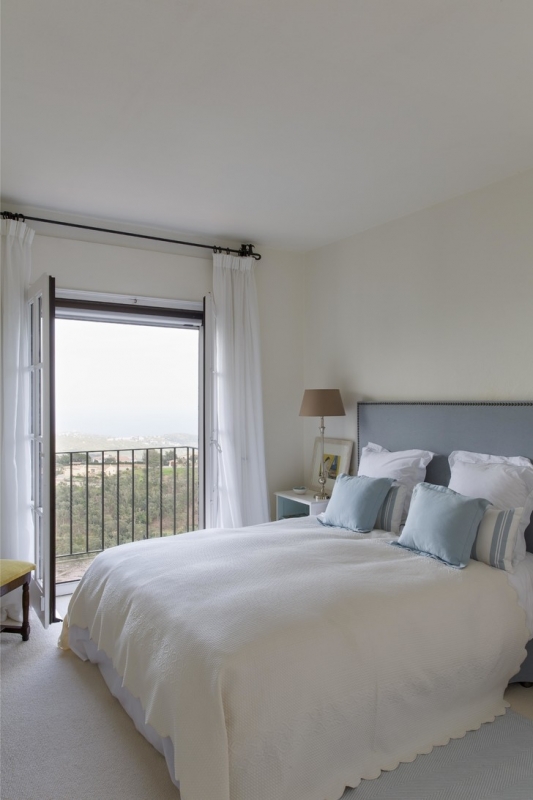 Guest bedroom. The bed is made according to the decorator’s sketch.