The non-pompous area of Greater Sochi, built up with mismatched garden houses and mansions with columns, decorated the laconic house of Nadia and Givi Ananyev, which the hostess herself will tell you about better 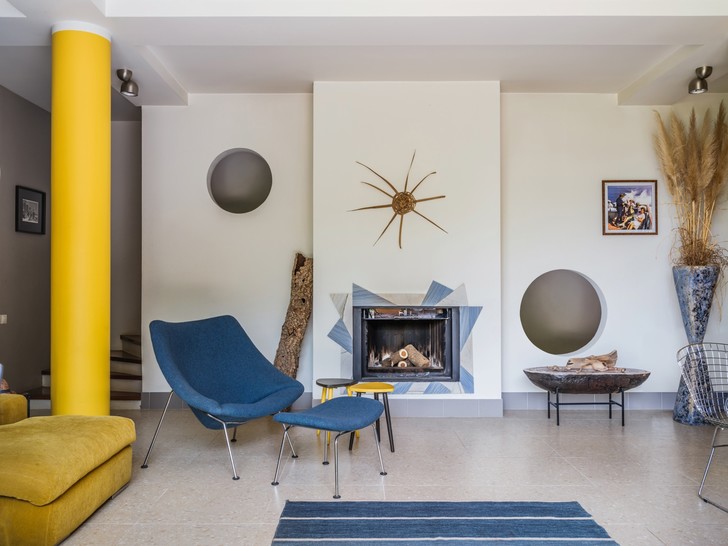 The living room is on the ground floor. The fireplace portal is made of marble scraps left over from previous projects. Above it is a «sun» woven by the owners’ son David when he was six years old. Ceramic table and floor vase by Givi Ananyev. Vintage armchair, 1960’s, @ng_gallery_. Round openings in the wall illuminate the staircase (above) and a niche for firewood (below).

We ended up in Sochi in 2013 by accident, for the first time since the late 1980s. If we were thinking about a house by the sea, it was more likely somewhere in Italy, however, like everyone else at that time. Our friend Natasha Sokhnyuk invited us to watch a project she was leading near Khosta. And today this area is not prestigious, and even more so eight years ago — garden houses on plots of five acres. One evening we went for a walk around the village. Humid air, juicy greenery — memories from childhood immediately flooded in, when I spent the whole summer with my grandmother in Sukhumi. We didn’t plan to buy anything, but we stopped in front of a small overgrown plot with a small house and fell in love. There were no announcements about the sale, but we confidently went to the board of the garden association. The chairman took out a crumbling map of almost the 1930s, when the land was allocated, and it turned out that the plot was for sale. In September, we started construction and moved in June of the following year. That’s what the neighbors say about us: «Those who quickly built up.» 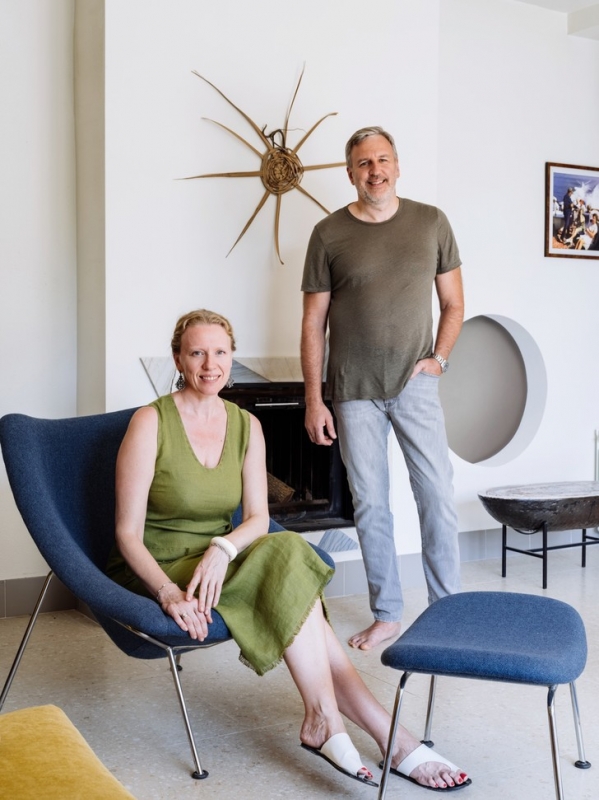 The owners of the house are designers and gallery owners Nadezhda and Givi Ananyev. 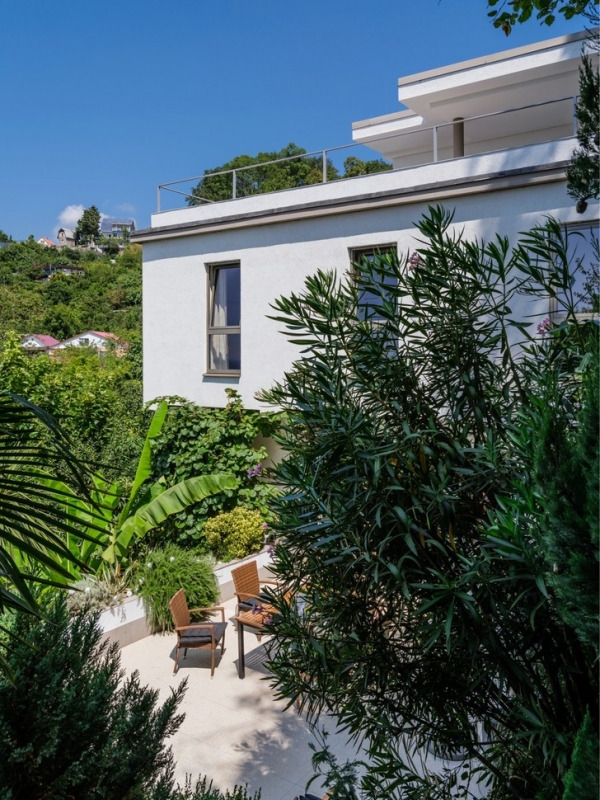 On the roof of the house there is a solarium, which was decided to arrange in the era of constructivism.

However, the project itself did not arise immediately. The original sketch, drawn for us by architect Fedor Arzamanov, did not go into work. Perhaps it was too beautiful: the glass house resembled utopian constructivist projects of ideal southern boarding houses of the 1920s. The sketch was left in our bedroom. We calculated how much money we had, divided it by the number of necessary rooms and derived an absolutely Bauhaus formula of the house. A living room on the ground floor, four bedrooms on the second, one on the third and a solarium. 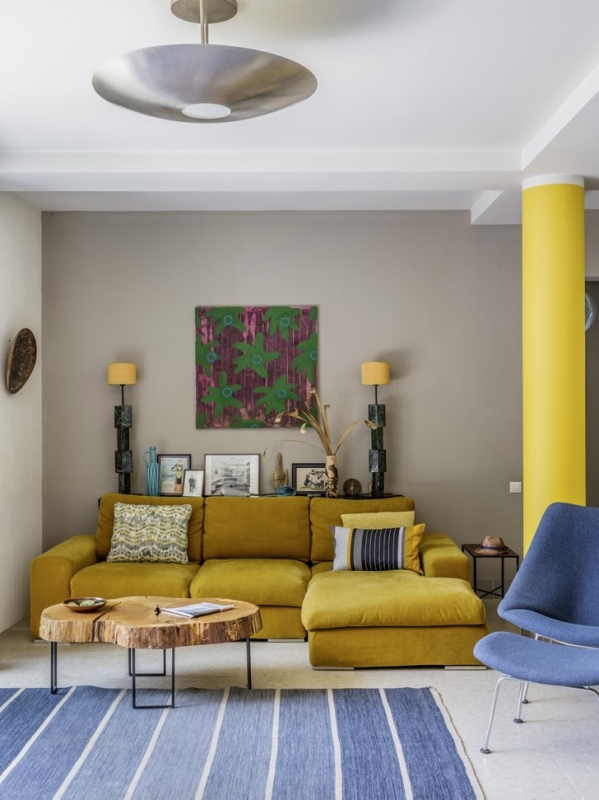 A fragment of the living room. Overhead lights, Germany, 2000s, from the first interior made by designer spouses. Plate on the wall by Nadezhda Ananyeva. Ceramic floor lamps and a painting by Givi Ananyev. The table is made of sawn wood found near the house.

We must pay tribute to the builders, they not only took into account the peculiarities of the soils, but also followed our aesthetic preferences. The facade is decorated with plaster characteristic of these places, which is called «bark beetle», only unlike neighboring houses it was applied in circular movements. The light gray, almost white facade caused bewilderment of the neighbors — different options were offered from peach to yellow. We left yellow only in the interior in the form of Corbusian columns and Soviet stools, in the form clearly borrowed from Charlotte Perriand. 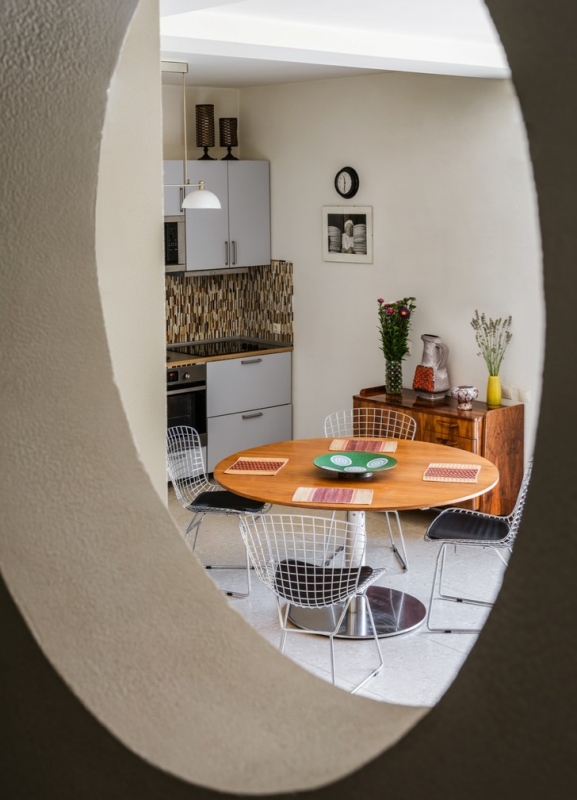 Through a round opening in the wall of the staircase, a view of the kitchen opens. The apron is made of glass mosaic imported from California. Kitchen, IKEA. On the vintage chest of drawers — ceramics by Nadezhda Ananyeva. Table, Tonon. Chairs, vintage, 1960s, @ng_gallery_.

I’ve been thinking for a long time why many of our projects, and this house, have a special vintage touch. Probably, it all started with an acquaintance with Givi’s parents — the first graduates of the interior design course in Stroganovka in the 1960s, who were engaged in the interiors of theaters, boarding houses, houses of culture. Their apartment would still be on the pages of magazines today: emerald walls, white platbands, panels made of straw instead of wallpaper, designer Czech and GED furniture, orange coffee machine, Baltic ceramics and tapestries. And I memorized several Domus numbers that they had in the library.

The library is in the hall of the second floor. 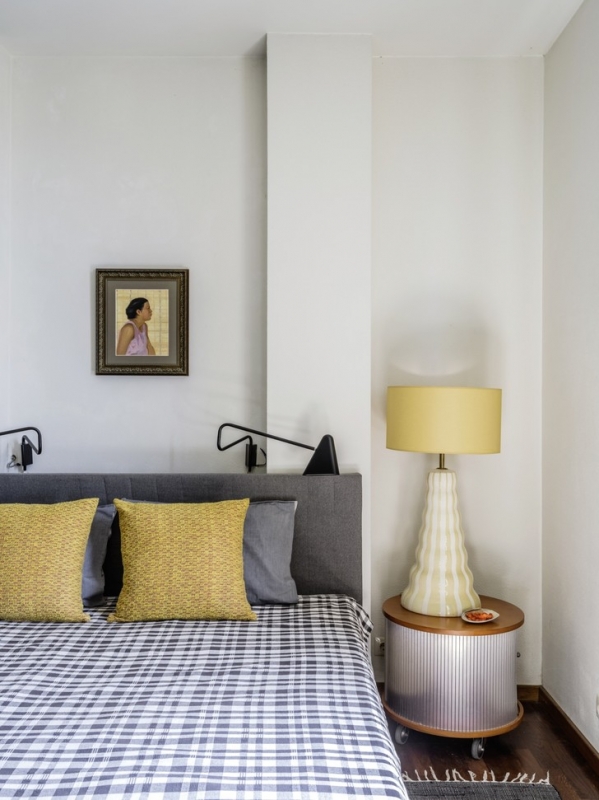 A fragment of the master bedroom. Table and lamp, vintage.

The situation of the new house was developing quickly: we bought the finishing materials that were available, brought furniture that turned out to be superfluous in the apartment, in the country and in the bureau. Something was taken from our NG Gallery. There was a place for ceramics, which we made during our studies and after the institute. The fireplace was faced with marble, left over from one of our projects. Everything was brought in one truck and arranged in a week. But the most interesting thing is that some of the furniture and fixtures come from our very first project, which was published in 2003 in ELLE DECORATION. The new owners of that apartment asked the previous owners to introduce us. So we made a new interior for them, and the old items came back to us. About the same as I returned to my childhood in Sukhumi. 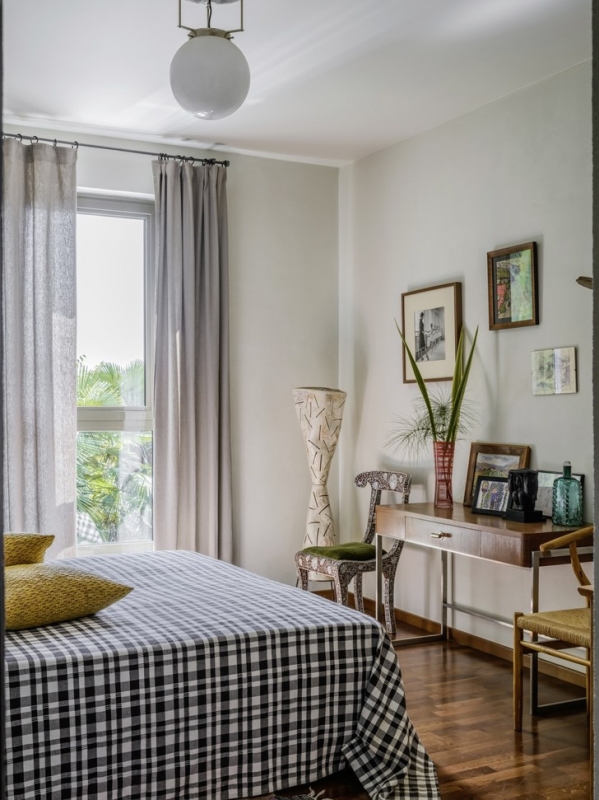 The master bedroom. The console was designed by designers in 2000 for the first project. The chair, inlaid with mother of pearl, was brought from Morocco. Floor lamp made of ceramics by Givi Ananyev. 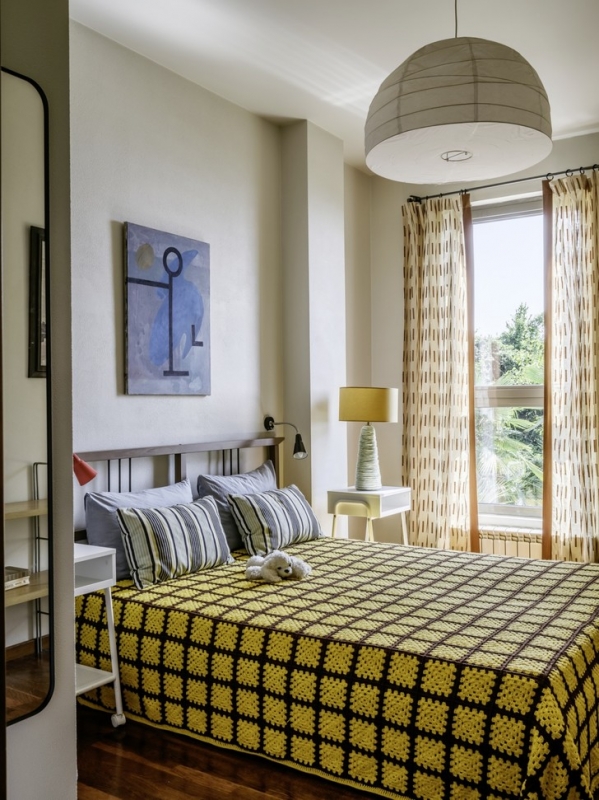 One of the children’s bedrooms. On the bed is a knitted bedspread from the 1960s, in which a vintage console was wrapped, bought by Nadezhda at a flea market in Italy. A painting on the wall and a ceramic table lamp by Givi Ananyev.

«The light gray facade caused bewilderment of the neighbors — different options were offered from peach to yellow. We left yellow only in the interior» 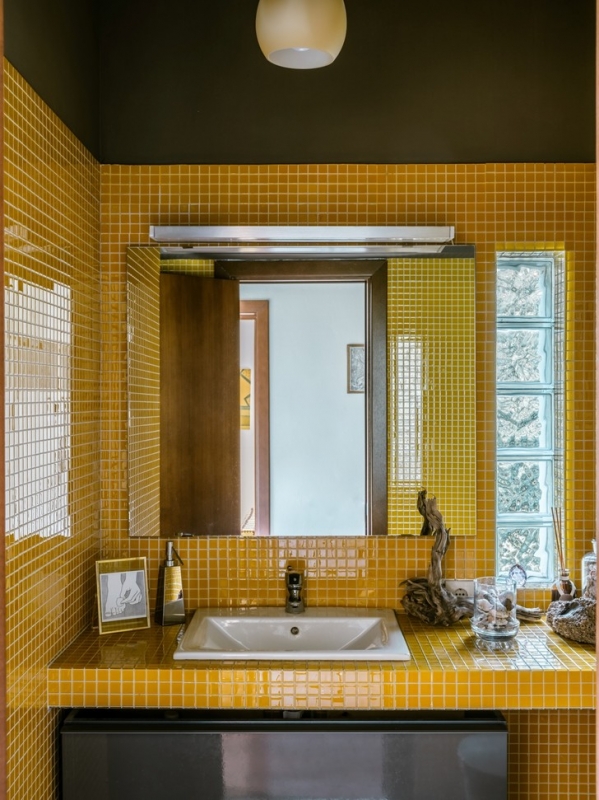 One of the bathrooms on the second floor is decorated with glass mosaic. Polished driftwood, thrown out by the sea, decorate the interiors of each room.