Whether Kelly Westler decorates interiors, writes books or poses for Playboy, she manages to do everything with a special chic

Kelly Westler has never been tormented by doubts when choosing a profession. Her career was predetermined from childhood. “My mom is an interior designer. I grew up in a constant cycle of wallpaper, paint and furniture,” recalls Kelly. 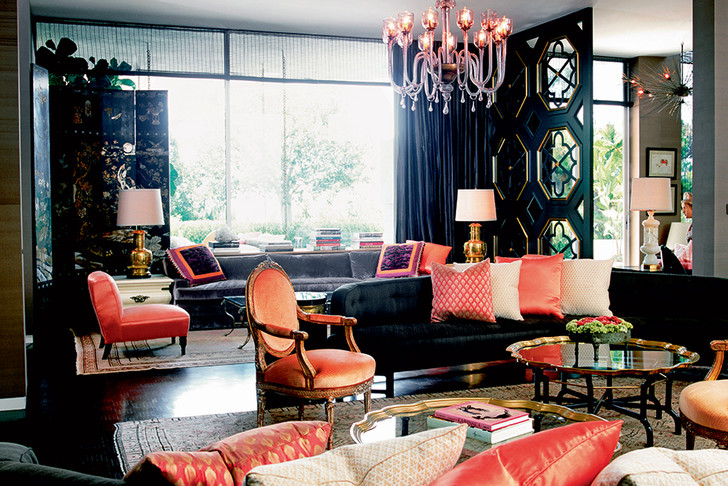 The living room in the home of decorator Kelly Westler is illuminated by an Italian chandelier from the 1930s. The walls are upholstered in gray silk, carpets, Mansour Khotan. The chair of the XVIII century was bought in France. The screen is made to order according to Kelly’s sketches. The cushions on the sofa are covered with a Fortuny fabric.

However, before following in her mother’s footsteps, Kelly managed to work as a waitress (“this experience helps me design restaurants a lot,” she admits), try herself as a production designer in Hollywood and even shoot nude for Playboy magazine. In the questionnaire accompanying the photo shoot, in the column “about myself” she wrote: I dream of opening an interior design bureau. 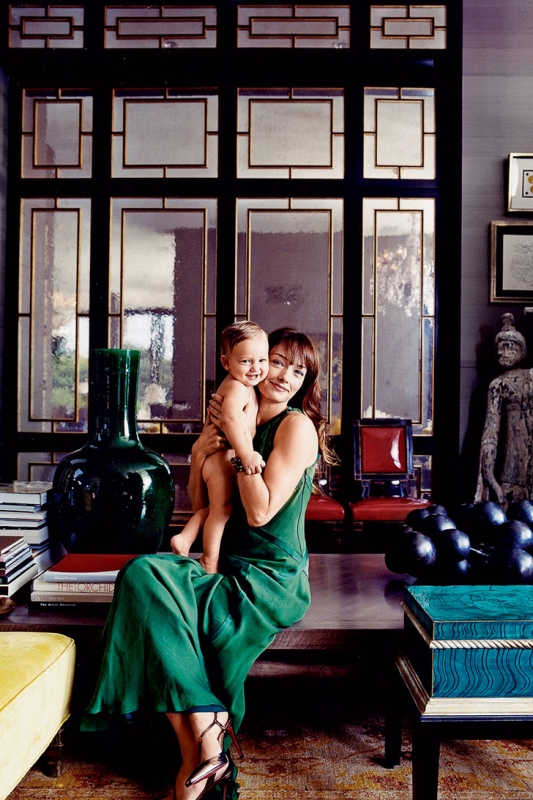 Kelly Westler with her son Elliott.

Kelly realized her dream by founding the company KWID (Kelly Wearstler Interior Design). “For the first year and a half, I was the only employee in it. I had to work 18 hours a day,” she recalls. The shock work was not in vain: now Kelly is among the cohort of the most sought-after decorators in America. 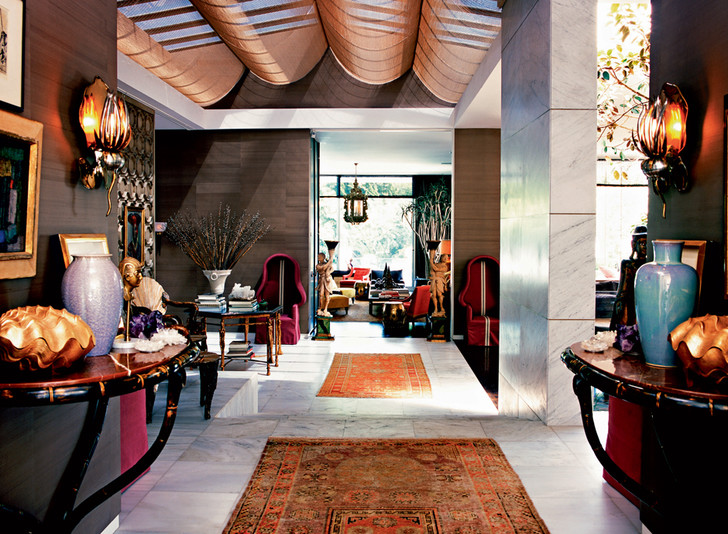 The walls of the hall are upholstered in silk, as in the living room. There is a vase on the bamboo console, Baker. Carpets, Mansour Khotan.

Her clients include actor Ben Stiller and other celebrities. Kelly “lit up” on television, becoming a judge of the reality show Top Design together with the editor-in-chief of the American ELLE DECOR. She often appears on the pages of glossy magazines — either as an interior expert, or as a secular character. 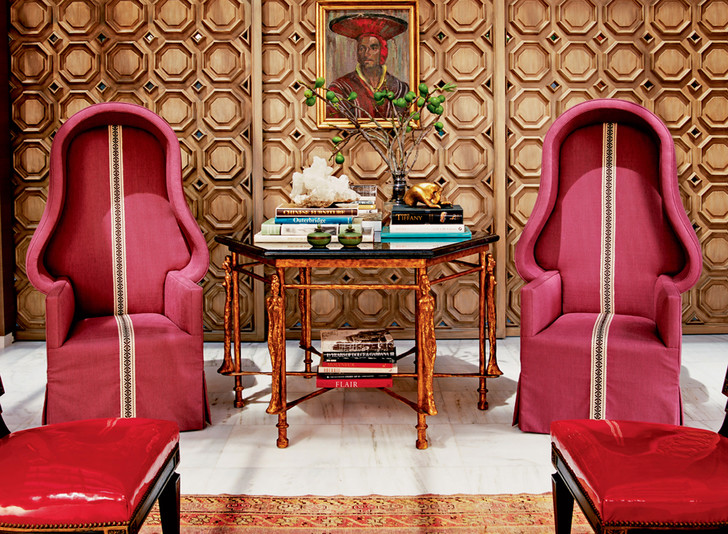 The chairs in the lobby are custom-made according to Kelly’s sketches. The carved door was designed by the author of the house, architect Hal Levitt.

Last year, Vogue magazine included her in the list of the most fashionably dressed people in America. Kelly has written two books in which she explains the peculiarities of her style, generously peppering the text with aphorisms and witticisms (“Life without color is like life without love.” “A small but spectacular detail in the interior looks like a mouse that suddenly growled.”) But her Beverly Hills mansion speaks better than any words about the decorator’s style. 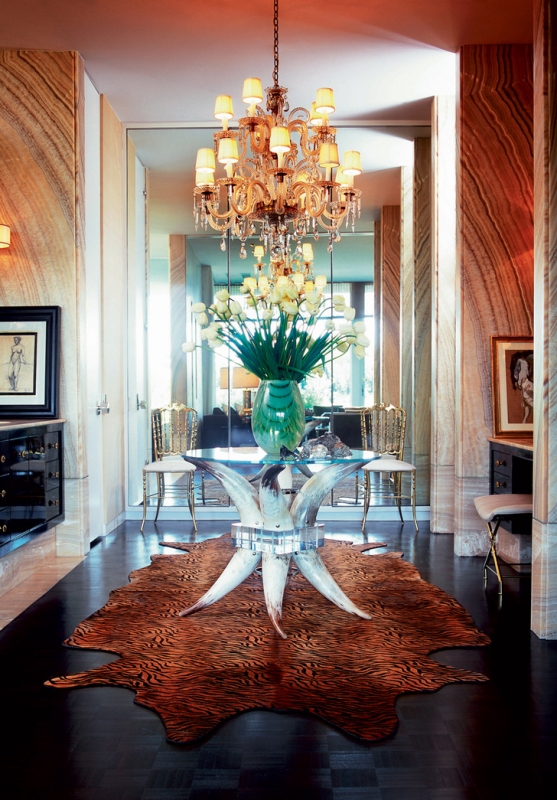 A white door to the left of the mirrored wall hides the master bedroom. Table made of horns and glass, Karl Springer. The walls are lined with onyx.

Kelly’s house was built by Hal Levitt, a favorite architect of Hollywood stars. Jennifer Aniston laid out $ 15 million for the 800-meter mansion designed by him. By the way, Kelly’s house is much more spacious — 1100 meters. 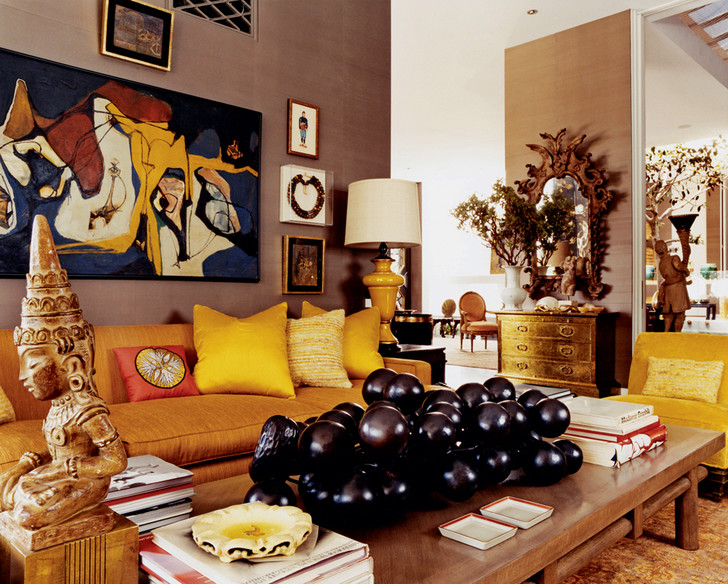 This room, adjacent to the living room, Kelly calls her “refuge.” A giant bunch of grapes on the table is a sculpture by Robert Kuo. The sofa is covered with fabric, Clarence House. Against the wall is a Spanish chest of drawers of the late XIX century.

“I “bought” the box of the building itself, with high ceilings and a well—thought-out layout,” says the decorator. — In addition, I was attracted by the huge window overlooking the garden. And the name of the architect decided the matter — I am a long-time fan of Levitt and his modernist interiors.” Kelly’s husband, developer Brad Corzen, approved of her choice and made several sensible suggestions for finishing the house. 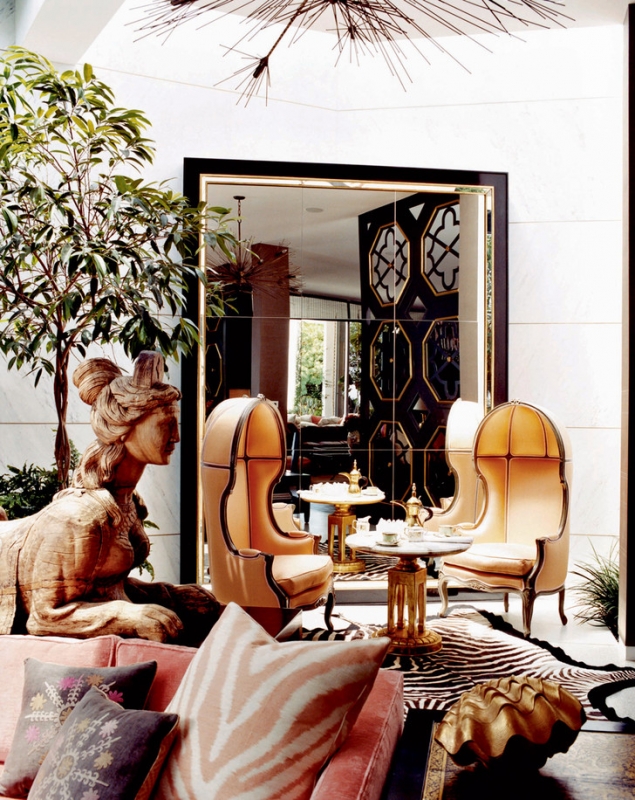 A fragment of the living room. The decor of this room has changed many times. Kelly says her wardrobe always influences the interior. And vice versa.

Sons Oliver and Elliott (aged four and six at the time) they did not give advice, but they provided valuable moral support. “It was my first family nest, and working on the interior was a completely new experience for me,” recalls Kelly. She was lucky: the house was in excellent condition. Except that the previous owners had somewhat peculiar ideas about comfort. 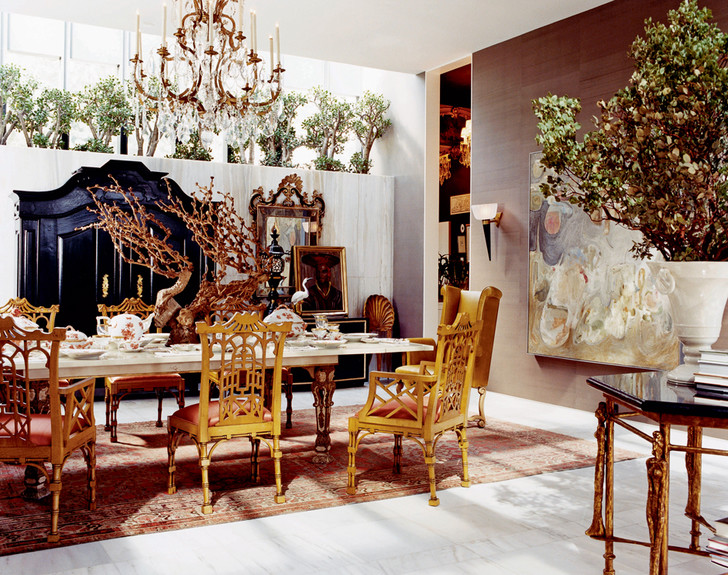 Canteen. The dining table, like the service, is an inheritance from the previous owners of the house. Bra, Jean de Merry. In

“Most of all, I was shocked by the four-meter pink sofas. Well, it’s very original!” the decorator laughs. But the onyx-lined bathroom and the three-by-three-and-a-half-meter sliding doors delighted Kelly. They, like the marble walls of the dining room, she kept intact. Kelly did not start a major renovation in the house, only changed the plumbing in the bathrooms and updated the kitchen. 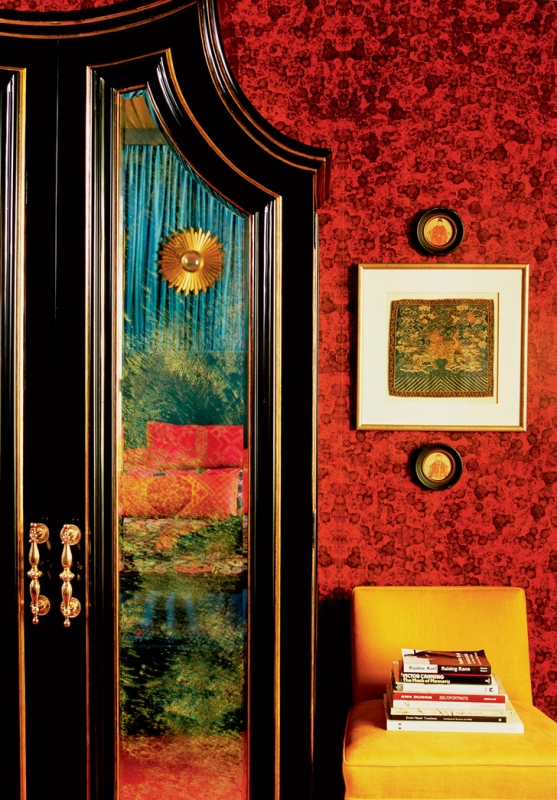 The wardrobe in the guest room is made according to Kelly’s sketch. On the walls — Tortoise wallpaper, imitating the shell of a turtle. Designed by Kelly Westler for F. Schumacher & Co.

Most of the time was spent filling the vast expanses of the mansion with pleasant-looking things. “The most difficult thing was to create a sense of comfort in these huge spaces. I had to put a lot of screens in all the rooms in order to somehow zone them.” Objects brought from her travels — statues from Thailand, Turkish textiles, Chinese chairs – helped to create a special atmosphere in Kelly’s house… 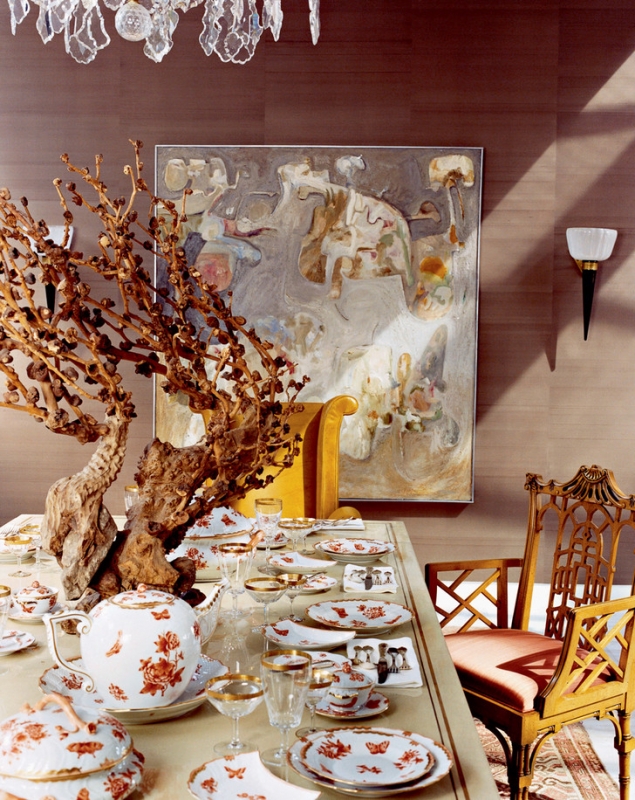 The ceremonial service went to Kelly from the previous owner of the house.

The decorator hunts for interesting things all over the world: shopping while traveling for her is a whole science and art at the same time. “I never buy anything in hotels and tourist shops selling mugs and T-shirts. I cut out articles about different cities from magazines and take them with me. Before the train, I “swallow” whole tons of all kinds of guidebooks and tear out the pages with the right addresses from them, so as not to drag the books themselves with me. 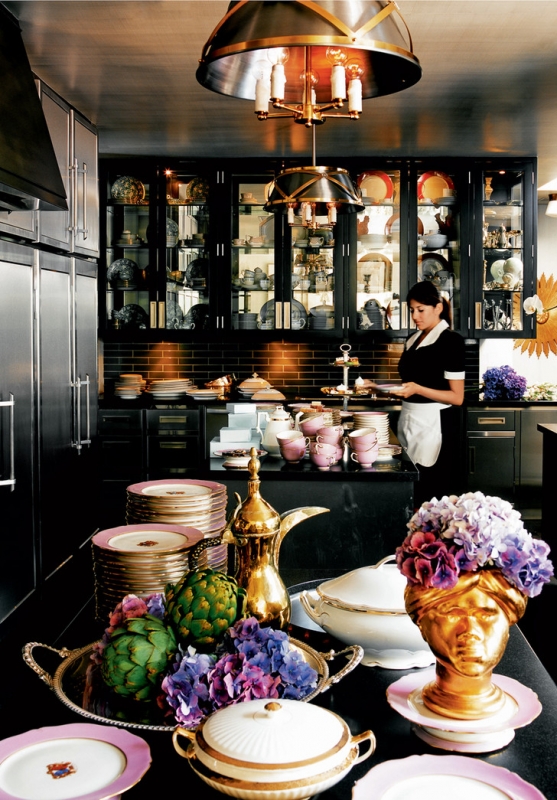 The main decoration of the kitchen is Kelly’s collection of vintage porcelain. 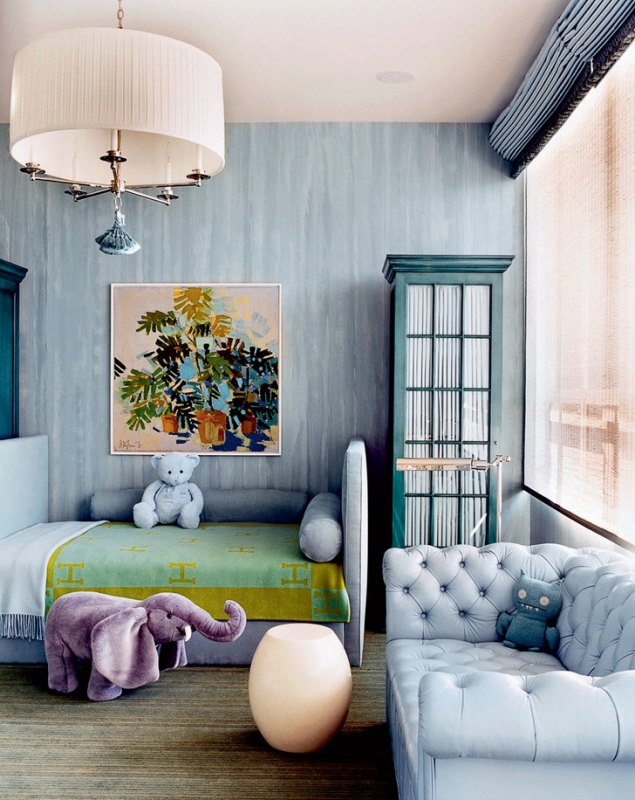 Purple nursery. Even the Chesterfield sofa is covered with leather of this color.

In third world countries, I ask the concierge to recommend me a guide who knows a lot about shops.” Like many decorators, Kelly “ran in” new finishing techniques on her home. She lined one of the walls in the living room with glass with bubbles inserted in wooden frames. 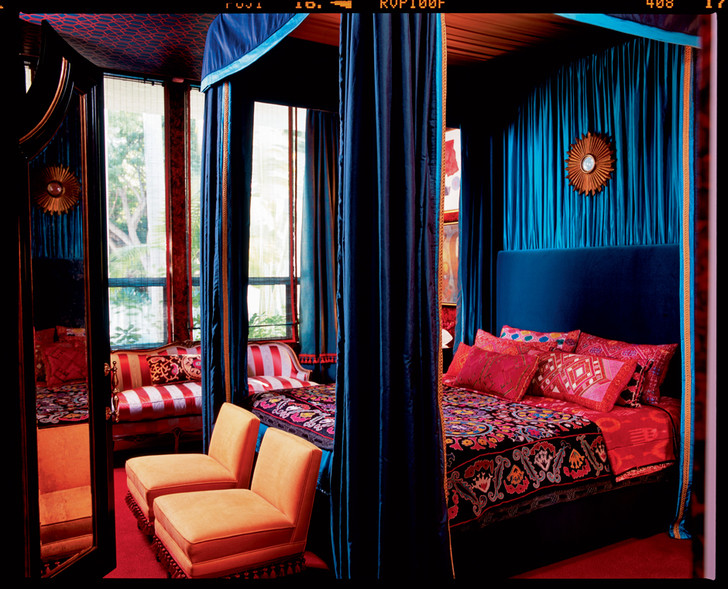 Guest bedroom. Bed linen and bedspread were brought from Turkey. At the foot of the bed are Chinese armchairs from the 1940s.

The result is a surface that reflects light like a mirror, but looks much more interesting… 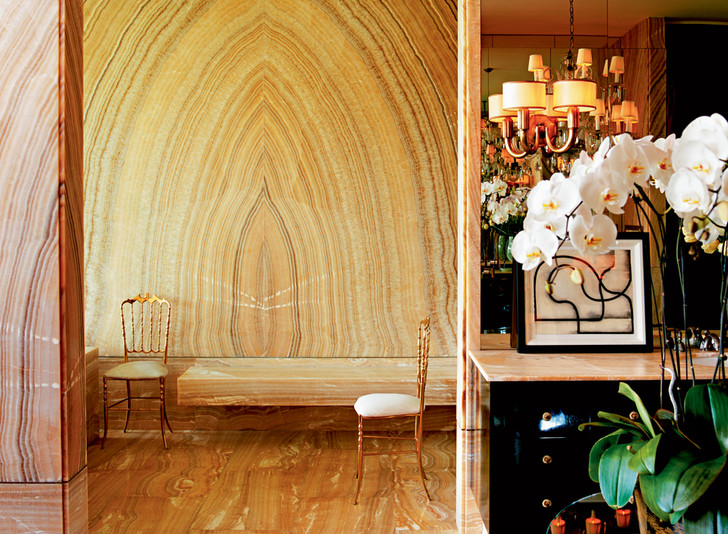 The walls and floor of the bathroom are lined with onyx. Vintage chairs and sconces from Jean de Merry.

“The designer’s house is his laboratory. Here you can afford what you don’t dare to offer the client,” she explains. Recently, she had a new field for experiments: her husband convinced her to sell the house and move to another, even more spectacular mansion located next door and sold at a similar price. 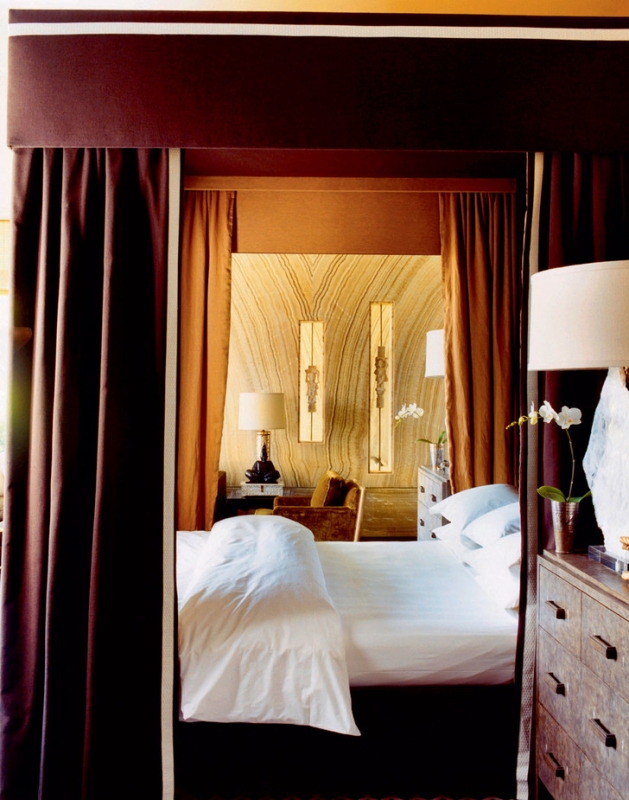 “Such a chance should not have been missed! Kelly exclaims. — So now we have to start all over again…” So, to be continued! 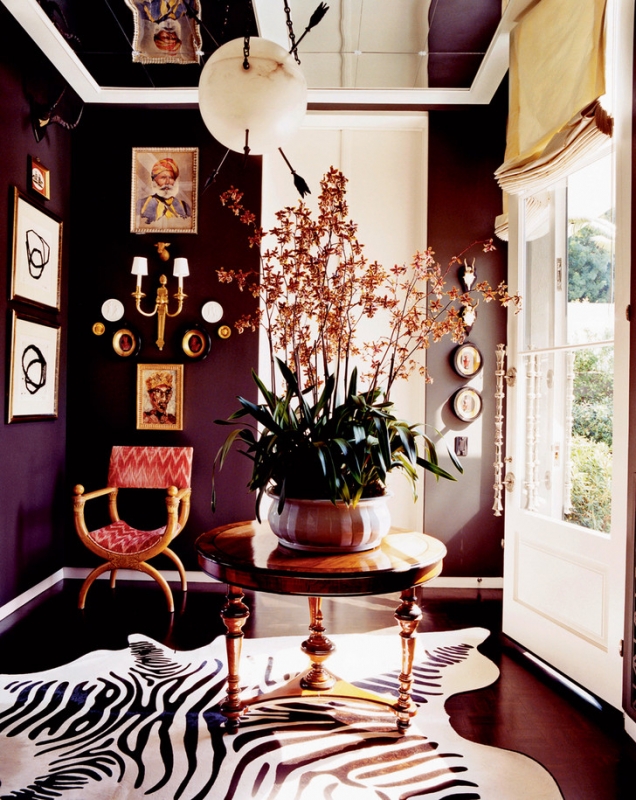 One of the halls. Kelly believes that the interior does not necessarily have to support the architecture of the building. Conflict is even better — it creates intrigue.