This cozy mansion in Normandy is the ancestral home of four generations of the Frey dynasty. According to the tradition that has developed over the years, they all come here for Sunday lunch 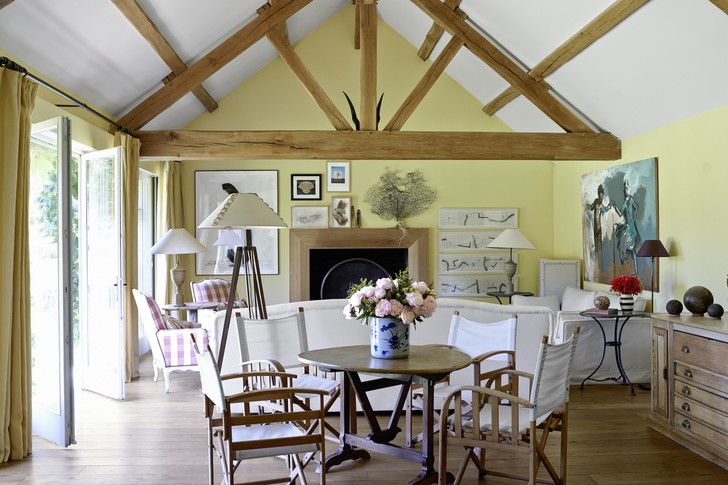 Living room. Vintage Belgian chairs from the 1930s are arranged around a table that used to stand at a local winery. In the background — deep French armchairs upholstered in fabric, Pierre Frey. 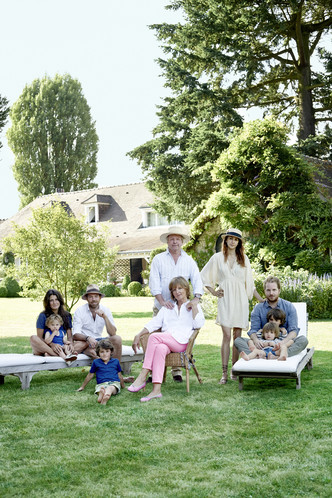 The Frey family. From left to right: Emily and Pierre with their son George, Andrea (Lorraine’s grandson), Patrick Frey and his wife Lorraine, Vincent Frey, his wife Blanca Lee Vasquez and their sons Vasco and Esteban.

Every Friday, Patrick Frey and his wife Lorraine leave their apartment in the center of Paris, get into a car and go to Normandy to spend the weekend in a country house. The picturesque village of Gallus, where the couple are on their way, is located just 40 kilometers from the French capital. “However, this is a completely different world,” Patrick admits. “A world of peace and quiet.”

The son of Pierre Frey, the founder of the French textile empire Pierre Frey, has been making such a weekly journey since childhood. A house with a garden, tennis courts, a swimming pool and even a small chicken coop grew up with him.

Four generations of the Frey family are coming here for Sunday lunch today. And it all started back in 1937, when the enterprising Pierre Frey, who was just starting his business, went on a business visit to Rene Pru— the famous decorator of the French Art Deco era. Among his works are the interiors of the Orient Express and the Normandy liner. Prue’s daughter Genevieve drew attention to the young businessman.

Escorting Pierre to the door, the girl asked if she could look into his office and show her drawings for fabrics. As you might have guessed, Pierre not only bought all the sketches, but also made a marriage proposal to the girl. However, the first years together of the newlyweds were overshadowed by the outbreak of World War II. “Dad foresaw Hitler’s plans—” Patrick recalls— “so back in 1938 he decided to move from Paris to somewhere in the suburbs.” 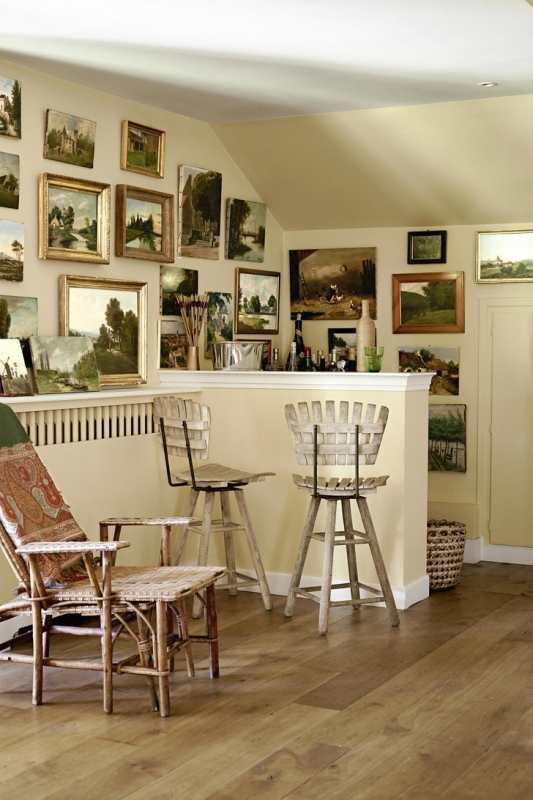 Bar. The walls are decorated with landscape paintings of the XIX century. Next to the vintage bamboo armchair are chairs, designed by Arthur Umanoff.

Since Genevieve spent her entire childhood in Normandy and was in love with the region of fragrant apple orchards, fresh oysters and camembert cheese, they decided to buy land there. The attracted plot had the romantic name Prairie. “Unfortunately, I completely do not remember the name of the architect who was commissioned to build the house,” Patrick admits. To clarify this question, he calls his mother on the other side of France. 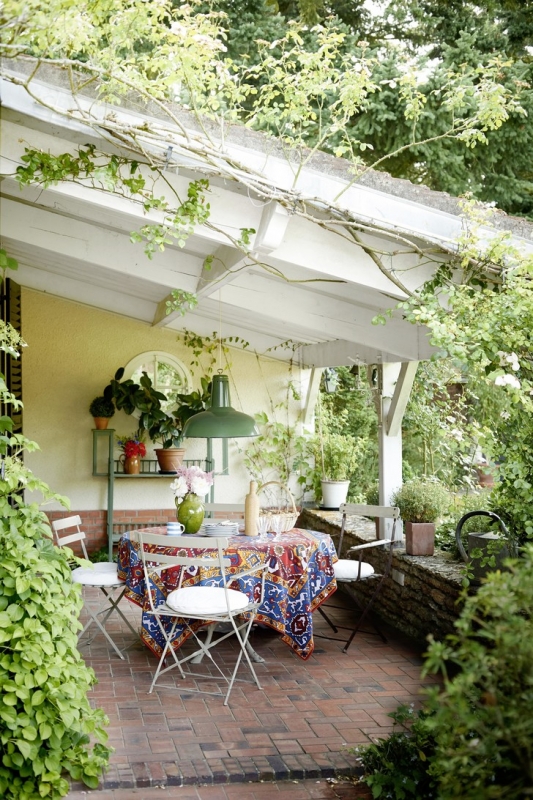 Terrace. Vintage garden chairs and a table were bought in an antique shop in Provence. As a tablecloth — fabric from the collection of the Pierre Frey factory.

“She’s 103 years old, but she still plays bridge, drinks whiskey and Coke and walks every day,” he says admiringly of Genevieve Frey. By the way, she, without hesitating for a second, called the name of the architect: Édouard Albert, an innovator and pioneer of his time. It was Albert who built the first residential skyscraper in Paris bearing his name — Tour Albert. However, then, in 1938, he still adhered to traditional views on architecture. Albert designed a house for Pierre and Genevieve in a typical Normandy style: with painted shutters and a roof whose steep slopes resemble mountain slopes. 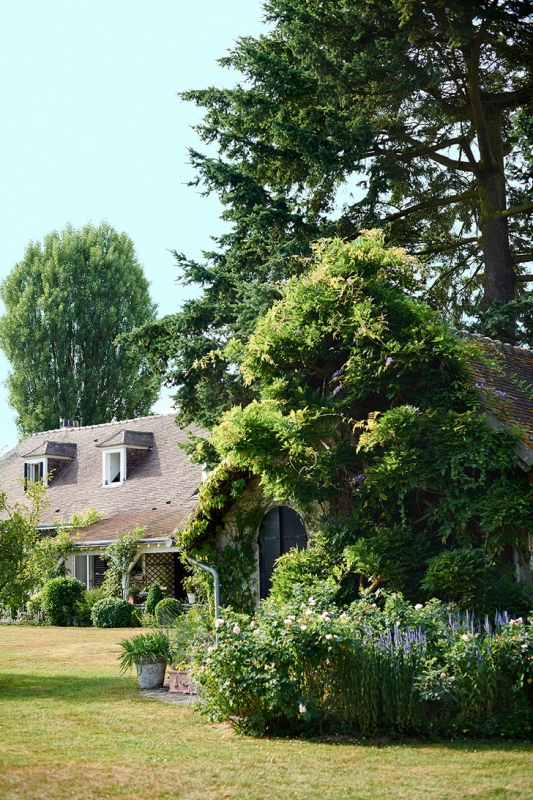 The house is surrounded by greenery. There are a lot of lavender, wisteria and rose bushes.

“As a child, every Wednesday my parents and I went to lunch at this country house in Normandy, and then returned to Paris for dinner” 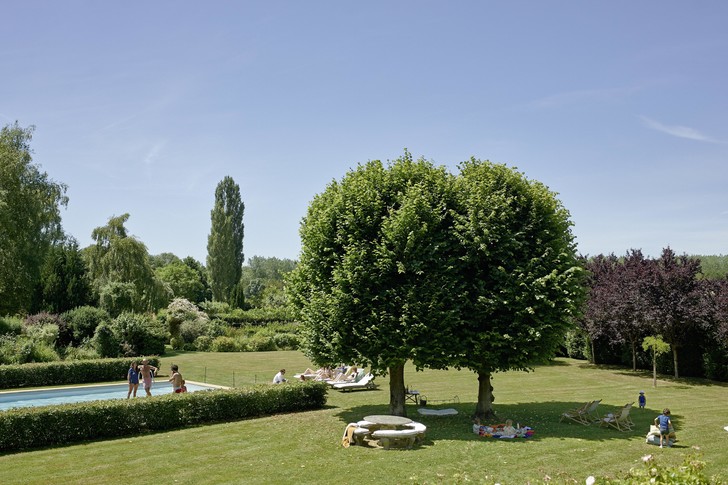 The Frey family’s favorite pastime in summer is, of course, relaxing by the outdoor pool in the garden, in the shade of lemon trees.

“When I was little,” Patrick recalls, “there were no classes on Wednesdays in Parisian schools. Therefore, on Wednesday, my parents and I left for Normandy for lunch, and then returned to Paris for lunch.”

After the divorce of Pierre and Genevieve, the house officially passed to Patrick. “My family was growing up,” says Patrick— “when I married Lorraine, I already had three sons from my first marriage, and she had two daughters. Our country mansion turned out to be small enough to accommodate all family members. Then a guest house was added to the main building with four bedrooms. But this did not save us — our children had their own children. Of course, it would be possible to add an additional wing, but it would already look like some kind of hotel or castle.” 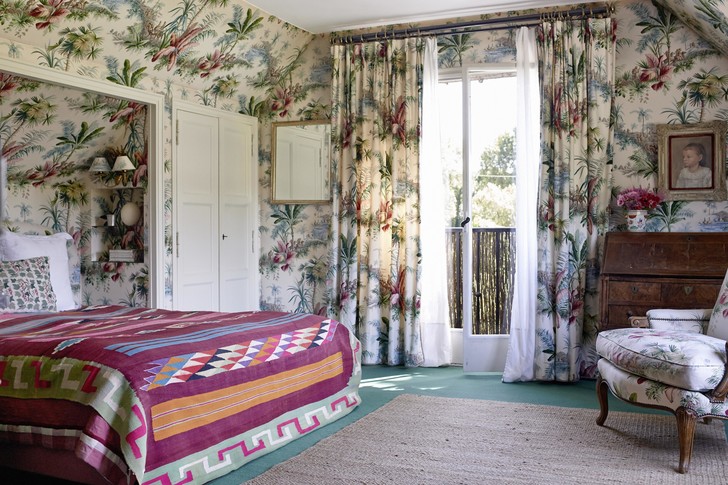 The master bedroom. The same fabric, Pierre Frey, is used for the upholstery of walls, chairs of the XIX century and curtains. Instead of a bedspread, there is a thin Moroccan carpet on the bed. corner – secretary of the XVIII century.

“Our family is growing all the time. I had to build a guest house. But that didn’t save us either” 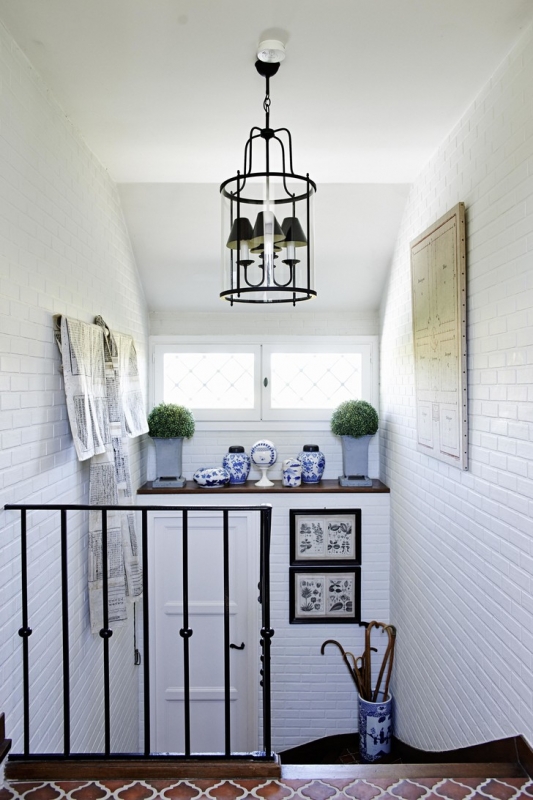 A vintage Chinese paper robe hangs on the wall of one of the staircases. Ceiling lamp, Delisle.

Despite such a special approach to the exterior of the building, the owners treat its interior with great calmness. “We needed a family home, not a sophisticated one,” explains Patrick. – My little grandchildren come here and if they are constantly told “don’t touch it” or “don’t climb on the sofa with your feet,” they are unlikely to want to come back here.” 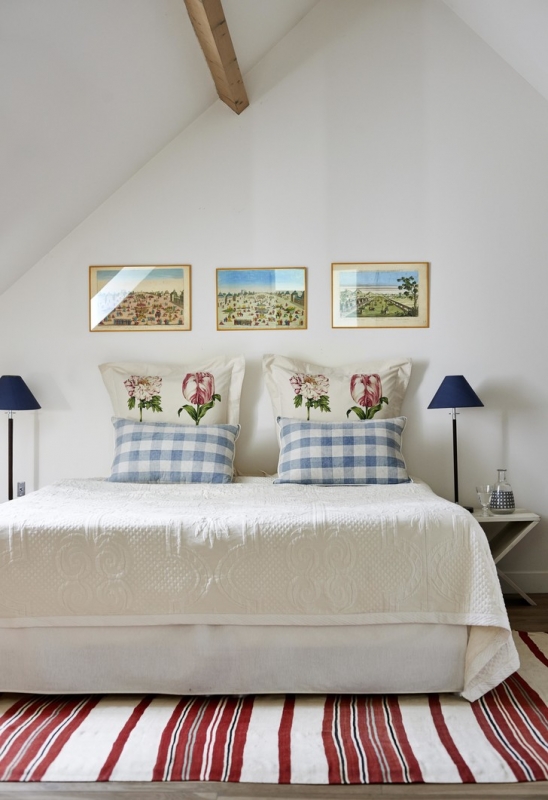 Guest bedroom. Bedspread with a pattern of the XVIII century, Pierre Frey. There is a Moroccan carpet on the floor.

Both in Patrick Frey’s Paris apartments and in the interior of his country house, antique pieces of furniture coexist with modern paintings, and all this against the background of wallpaper and fabrics from the Pierre Frey factory. “My wife prefers modern things—” says the owner. “But she has to put up with my love of the old days.”

Every item here bears the imprint of history, whether it’s vintage Belgian chairs from the 1930s, a bedspread with a printed pattern of the XIX century, Louis XVI-style armchairs or antique oak boards on the floor. “Is the interior finished?  Patrick Frey asks again. — I don’t know. I can still get up in the middle of the night and start rearranging furniture. It’s from my mom. Did I tell you that a couple of months ago she repainted all the walls in her own house? At 103 years old!” 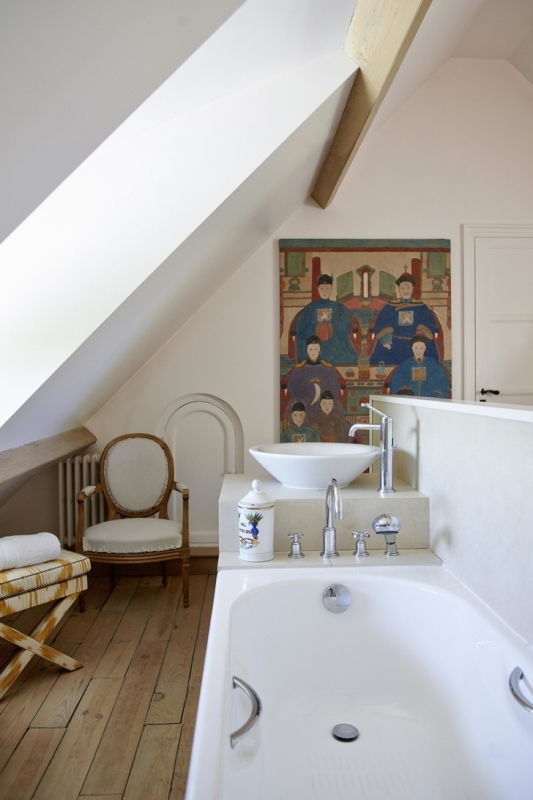 Guest bathroom. There are Chinese paintings on the wall, old oak boards on the floor. An armchair in the style of Louis XVI. A stool from the collection of the Pierre Frey factory upholstered in Toile de Nantes fabric.