The residential building on Kotelnicheskaya Embankment is the famous Stalin high—rise, one of the most prestigious real estate objects in the capital. In Soviet times, the elite lived here, today many apartments are rented or sold. Let’s take a look and take a closer look at them 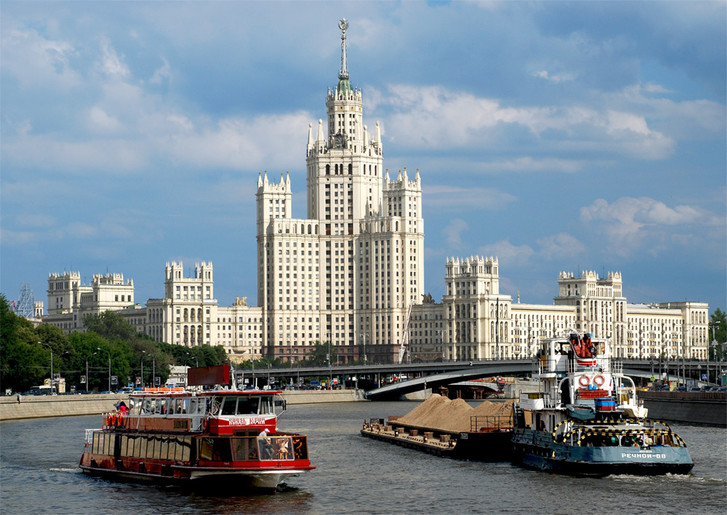 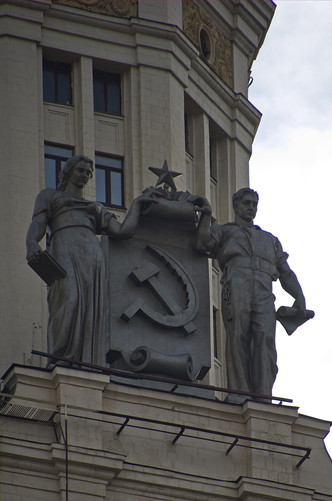 The residential building at Kotelnicheskaya Embankment 1/15 is well known not only by Muscovites. This is one of the seven famous Stalin skyscrapers, which, according to the General Plan, were to become the new architectural dominants of the capital. The high — rise was built in two stages – before the Great Patriotic War in 1938-1940 and after in 1948-1952 . The authors of the project were architects Dmitry Chechulin and Andrey Rostkovsky, and the chief engineer was L.M. Gokhman.

The residential complex on Kotelnicheskaya is a real “city within a city”, the center of which is the main building with 32 floors. Its height together with the spire is 176 meters, so the house on Kotelnicheskaya is the third tallest of the seven high-rises after the main building of Moscow State University and the hotel “Ukraine”. In the side buildings from 8 to 10 floors. Behind the house there is a shady, green square with flower beds, pedestrian paths and fountains and its own garage complex. 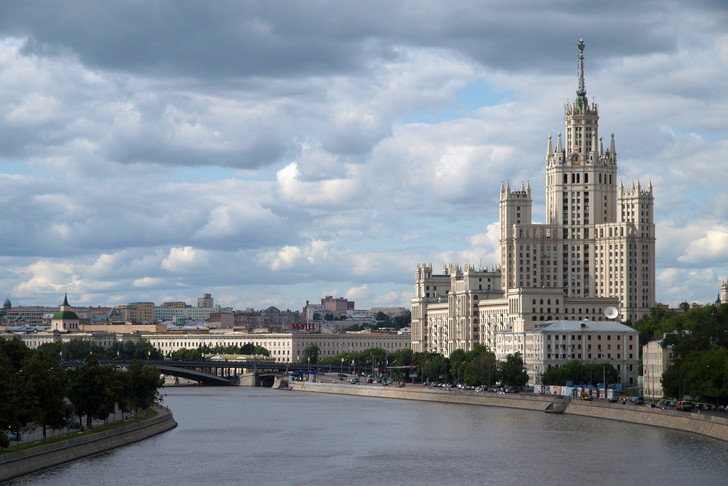 Initially, there were 540 apartments in the house, of which 344 were located in the tower, many of them with a second exit to the “black” staircase. In addition to the usual ventilation, the central air conditioning system worked in the house, which was a revolutionary solution for that time, and a special anti-dust system was built into the walls: dust was collected using hoses and sent to the sewer through filtering stations. Electric refrigerators, built-in furniture, sinks with a waste crusher, and a garbage chute were installed in all apartments and kitchens. 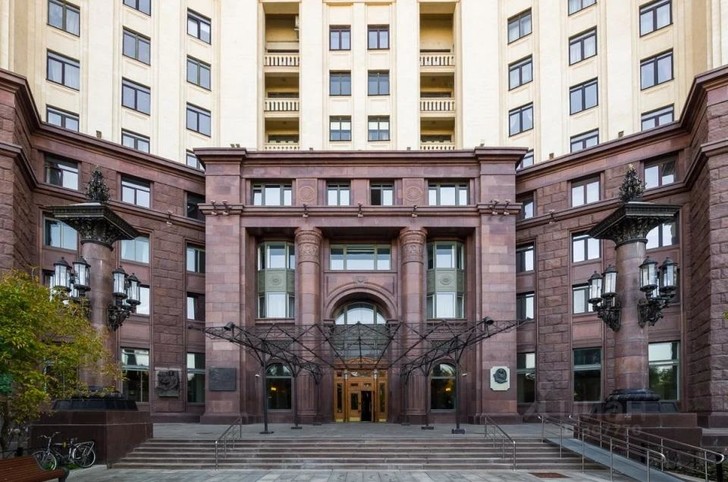 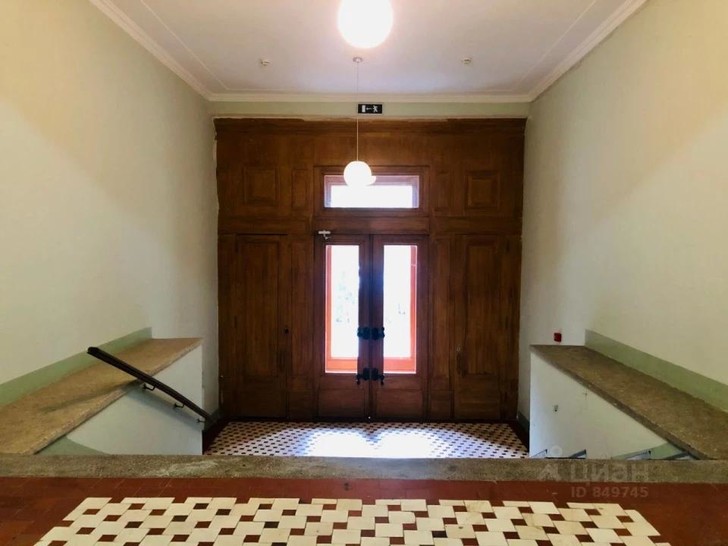 The interiors of the public spaces of the skyscraper, as well as its architecture, are a typical example of the Stalinist Empire style, for which luxury and monumentality are characteristic. The halls and staircases were lined with marble, non-ferrous metals, valuable wood and decorated with paintings, rich stucco, bas-reliefs that have survived to this day. 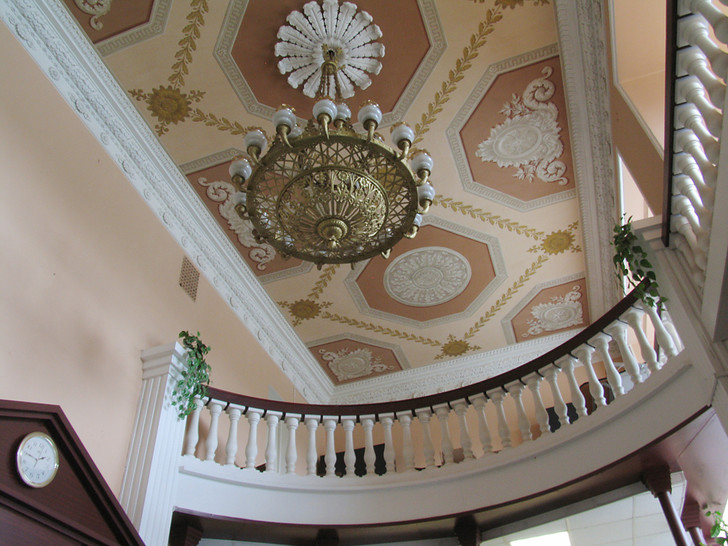 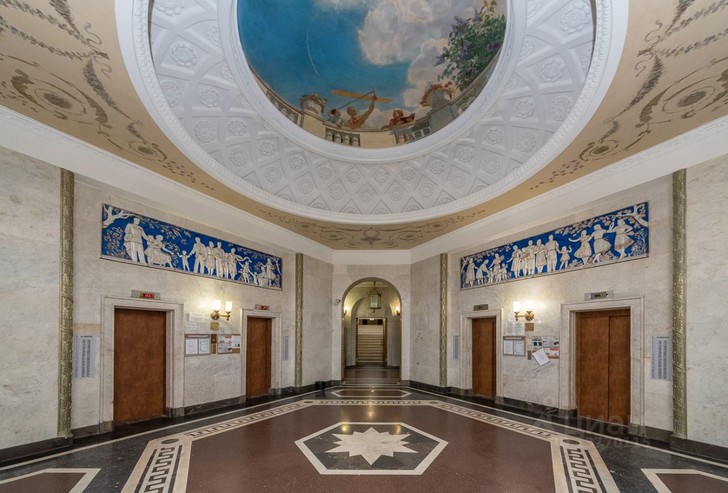 The apartment museum of ballerina Galina Ulanova is still working here: if you want to see how the stars of the Soviet era lived, buy a ticket on the website www.gctm.ru and go on an excursion — everything is preserved here in the same form as it was during Ulanova’s lifetime, and even memorable souvenirs and photos are in the same places, where the hostess put them. ELLE DECORATION once visited this apartment and even published it in one of the issues of the magazine.

1/8 Guest room, it’s also a dining room. The furniture in the room is exactly the same as when the ballerina was alive. On the wall there is a portrait of the hostess, the artist Georgy Vereisky.

We also published other interiors of the legendary house. Unlike the apartment of the legendary ballerina, where time seemed to stand still, there is little left of the historical situation in them. For example, in this apartment with an area of 71 square meters. meter. “The house is well known for films and famous residents,” say the authors of the project designers Elena Tikhonova and Igor Kurkin. — The aura of mystery is added by endless corridors for wiretaps, niches for weapons, which, among other things, we discovered during the repair process. Although the apartments in the modern sense are quite compact. The area of this one, for example, is only 71 square meters, but there are two entrances — front and black.”

The owners of the house wanted a spacious living room and, most importantly, an isolated bedroom, which in the original layout was adjacent-isolated. Therefore, during the renovation process, it was decided to abandon the long corridor. Otherwise, the original historical layout was preserved, and the rooms were decorated in a modern style.

The living room and dining room are located in a single space and are separated from the kitchen by a sliding glass partition. The main shade of the interior was chosen pearl-gray color of morning fog. The ceiling is painted in a gray-blue tone, which gives it depth and emphasizes the beauty of the molded cornice. Above the antique oak table hangs the only chandelier in the entire apartment — vintage ItalianYanka from Stilnovo hails from the 1980s.

Now several apartments are for sale in the legendary house, including an open-plan studio on the 25th floor with an area of 839,793 m2. You can buy luxury apartments that occupy almost an entire floor, 32 500 000 ₽. The interior of the studio is not in the photos, but maybe it’s for the best — some ads hurt the eyes. 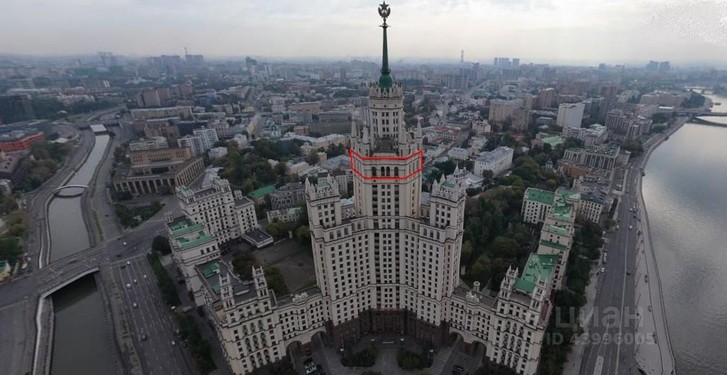 Like, for example, from this offer — a three-piece 96 m2 on the eighth floor, which is being sold right now for 138 000 000 ₽. “Very expensive and high-quality repairs in the style of Italian classics”, furniture made according to an individual project from precious woods, oak panels on the walls, “highly artistic parquet” from exotic woods and … a complete lack of taste from the owners! A good example of how you can transfer expensive materials and throw a lot of money to the wind, creating an uncomfortable, unpresentable interior.

There are simpler apartments for sale — a 50.3 m2 two-bedroom apartment on the 10th floor of one of the side buildings is put up for “Avito” for 42,950,000 rubles. The herringbone parquet floor and stucco cornices have been preserved here, but it is clear that the apartment was redeveloped and the kitchen was combined with the living room, making the layout more modern.

In general, the kitchen and bedroom look pretty cute, but the owners of this apartment were not spared the love of uncomfortable, bulky leather sofas (a clear relic of post-perestroika times, when a leather sofa was considered a symbol of luxury and prosperity as opposed to the impoverished Soviet past). One such sample took over an already narrow living room, making it absolutely not ergonomic and leaving no “air” in the space. We would advise the future owners of this apartment to look for an alternative to the sofa, and at the same time to study our material on the organization of space in a small living room.