Stalin’s skyscrapers, built in the middle of the last century as symbols of the new Moscow, have become one of the business cards of the city. Striking in their monumentality, they attract tourists. Let’s look into the apartments of the high—rise building on the Red Gate and find out what it’s like to live inside? 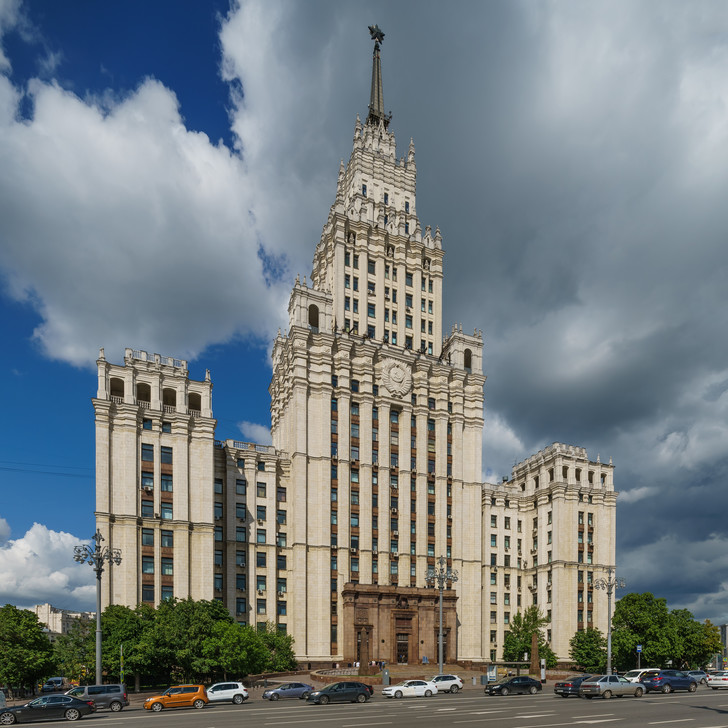 Another name for the high—rise on the Red Gate is the “curve” high-rise. This is due to the unique technology that was used in the construction of the building. Due to the tight deadlines, it was decided to build a building and a new lobby of the Krasnye Vorota metro station at the same time. To do this, the complex quicksand soils were previously frozen, and a small counter-roll was laid in the project of the skyscraper itself: when the construction was completed, and the soils thawed, the building assumed an even vertical position under the influence of its own weight. 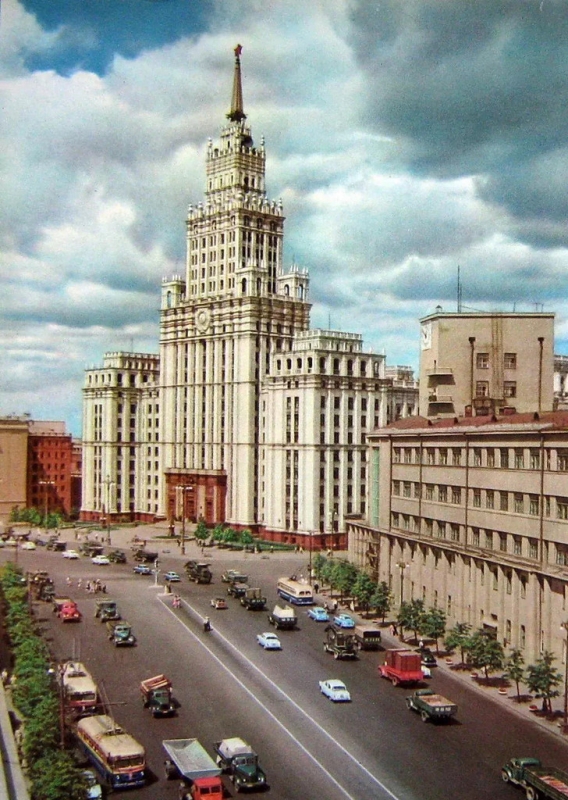 There used to be a house here where the poet Mikhail Yuryevich Lermontov was born in 1814. Opposite was the Church of the Three Saints, and in the center towered a huge Triumphal Arch of the XVIII century — a Red Gate with a trumpeting angel at the top, which reminded of the victories of Russian weapons. During the years of Soviet power, the church was demolished, the Red Gate was destroyed and the Lermontov house was sent to the landfill of history. Now the Stalin high-rise stands on this place. 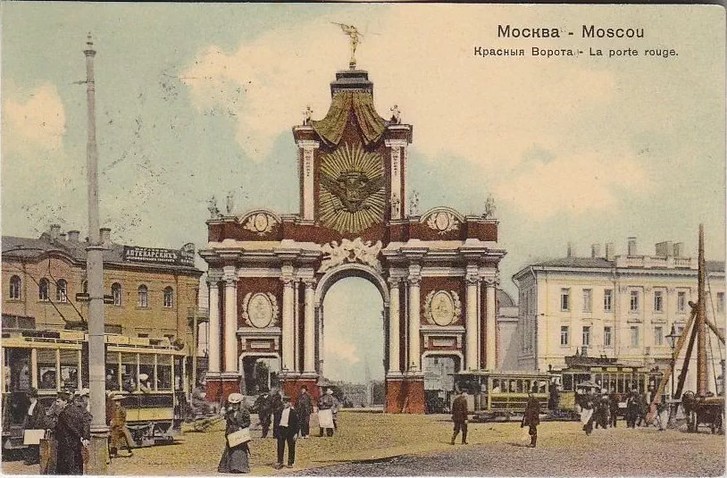 The construction industry of the Soviet Union was poorly prepared for high-rise construction. Before the Great Patriotic War, Moscow knew mostly brick, relatively low-rise buildings. A new material and technical base was created for the construction of high-rise buildings. Special factories were laid in the Moscow region. The designers developed new tower cranes with a maximum lifting capacity of 15 tons and which could lift themselves from floor to floor as the building grew. 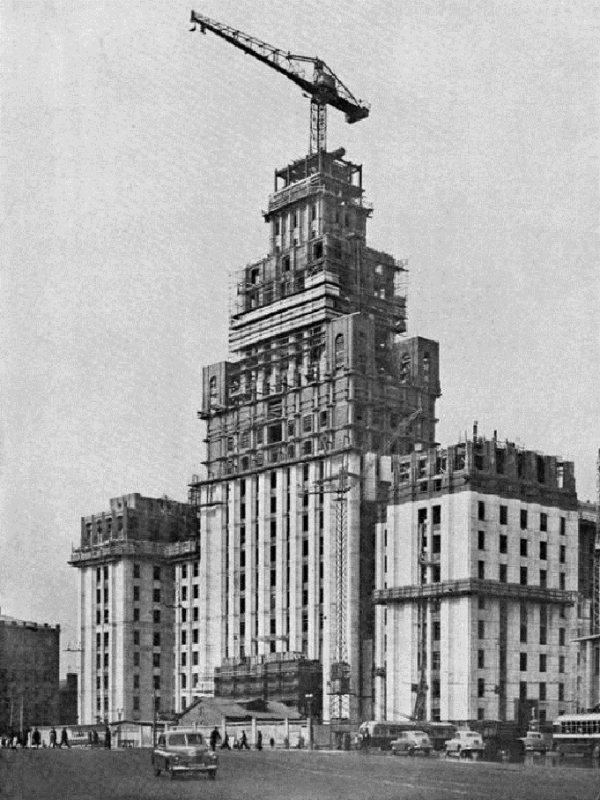 A distinctive feature of this high—rise building is the placement on the ground floor of the ground lobby of the Krasnye Vorota metro station. Interestingly, at the time of construction, the architects assumed that in the future exits from the stations would appear in all Moscow skyscrapers. The ceiling of the lobby is decorated with stucco and crystal chandeliers, which continues the style of the skyscraper itself and creates a sense of a single composition. 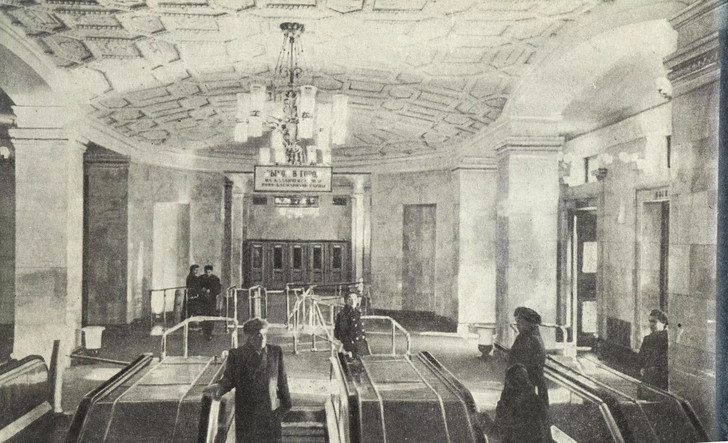 The high-rise on the Red Gate differs from others not only by the presence of the metro. In general, the building looks nobler than the sisters due to the fact that more expensive materials were used for its decoration: the facades of the high—rise part are lined with limestone, and the first floors are red granite. At the same time, the lobby without decorative panels and art paintings looks much more modest than in other “Stalinki”. 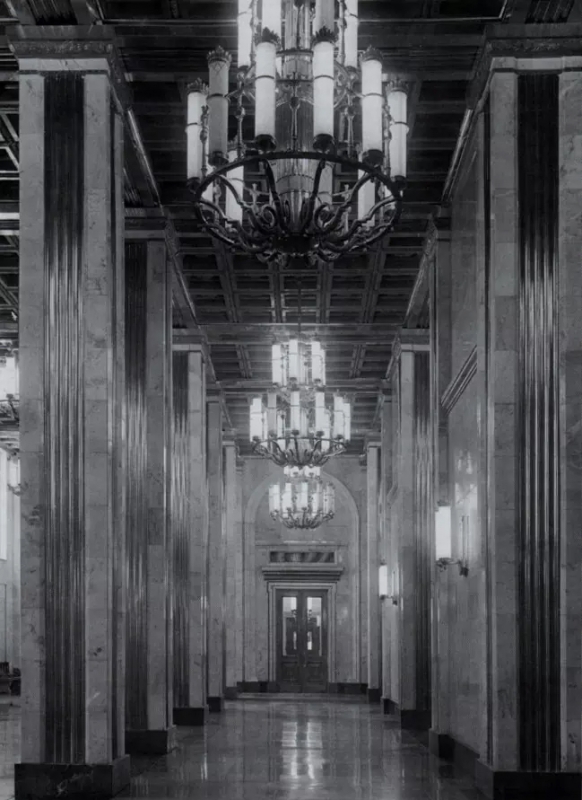 It was assumed that the 24-storey spire, 138 meters high, would house premises for the Ministry of Transport Engineering. And the side buildings of variable number of storeys — from 11 to 15 floors — will accommodate apartments. The high—rise on the Red Gate is the penultimate in height (only the Leningradskaya Hotel is two meters below it), but if you look from afar, the feeling that it is lower than the others does not arise due to its advantageous location on a hill. 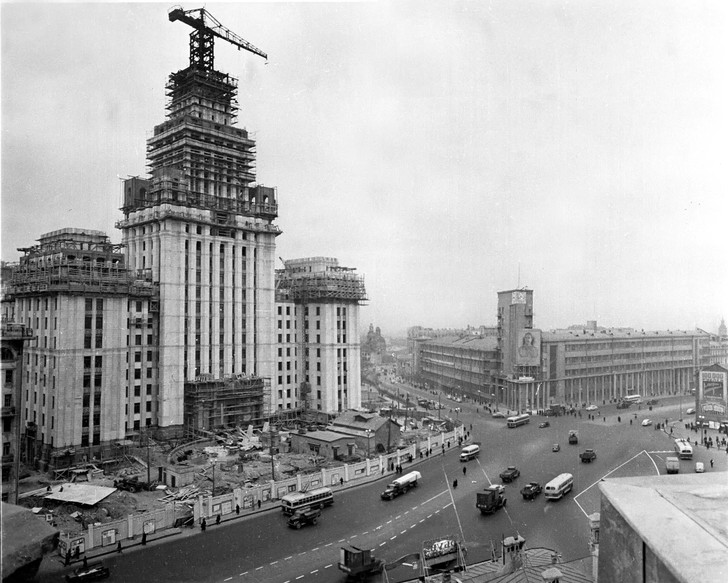 The main purpose for which the skyscrapers were built was ideological — to “crush” the old Moscow and show the advantage of the new, red, socialist one. The solemn laying of the Moscow skyscrapers took place on the day of the 800th anniversary of Moscow simultaneously at all construction sites. At that time, there were no projects for future buildings. The rush is explained by the personal interest of Stalin, who sought to demonstrate the greatness of the Soviet Country.

Architects Alexey Dushkin, Boris Mezentsev and designer Viktor Abramov worked on the project of the high-rise on the Red Gate. 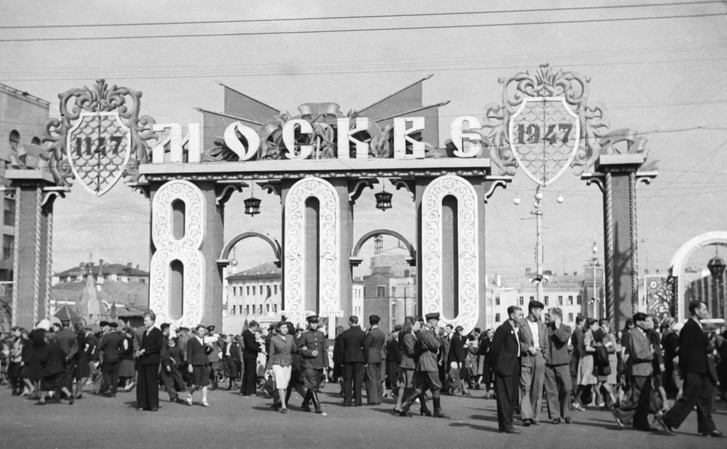 READY TO MOVE IN

The apartments were already rented with finishing. Refrigerators were installed in the kitchens, furniture was built in, sinks with a large waste disposal were installed — this was an absolute dream for the early 50s. All residents had access to a garbage chute, centralized air conditioning and a dust removal system functioned in the house. Boilers were installed to heat the basements. 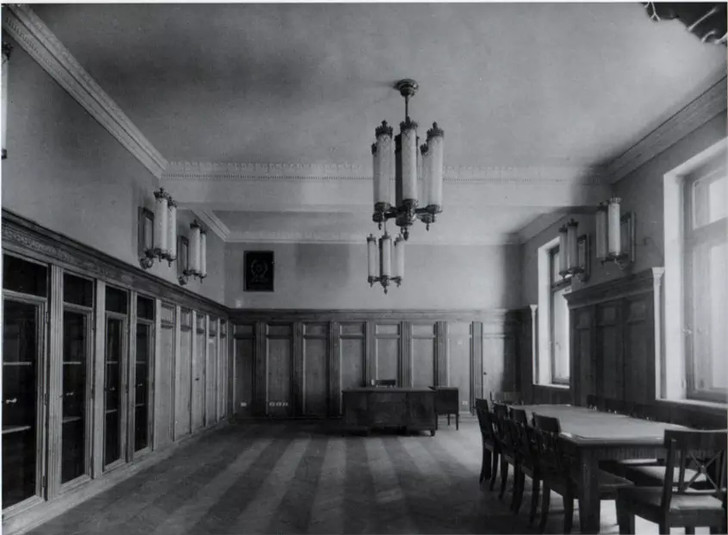 Many of the original doors and lamps in the entrance have been replaced with cheaper simple analogues. No one has been using the garbage chute for a long time, and on holidays, due to the fact that the house occupies the space of almost an entire block, it is almost impossible to leave the yard by car. Due to the proximity of the Basmanny court, it is sometimes difficult to drive up to the house due to the large congestion of police cars and journalists. 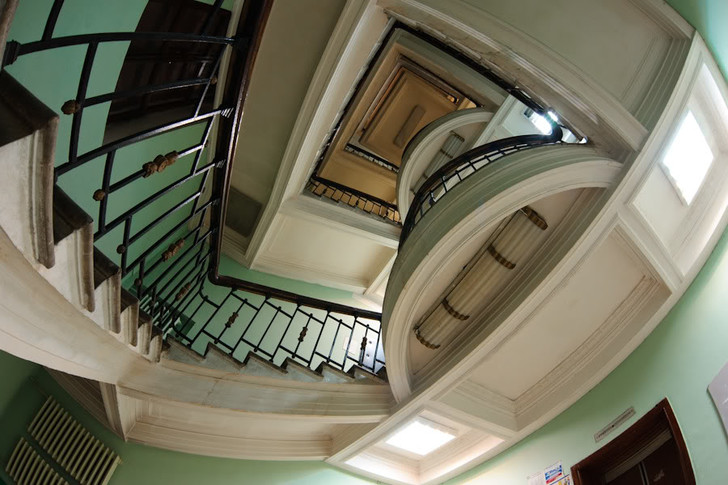 The residents of the high-rise building say that they love their neighborhood for the fact that it is intimate and cozy, that you constantly meet the same people here. And this creates a feeling of home, a feeling of the hometown, which can often be lacking in the vast Moscow. The house itself is also cozy: there are 276 apartments in total, which is significantly less than, for example, in the high-rise on Kotelnicheskaya Embankment, where there are 700. The neighbors are friendly and make decisions on home issues together. Leningradsky Train Station is within walking distance. 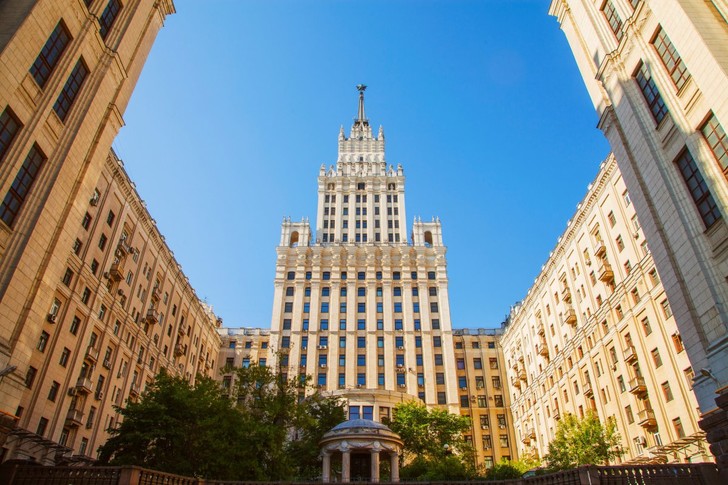 Living in a high-rise is still considered very prestigious, and in Soviet times it was the most elite real estate in the whole country. The intelligentsia, the most valuable people for the state, lived here. Among them were actor Boris Chirkov, surgeon Sergey Yudin, art critic Alexey Fedorov-Davydov, cinematographer Anatoly Golovnya, writer Egor Radov and Ministers of Transport Construction of the USSR Evgeny Kozhevnikov and Ivan Sosnov.

In the fall of 1999, Balabanov filmed the scene of Danila’s apartment for the cult film “Brother 2” in this house. 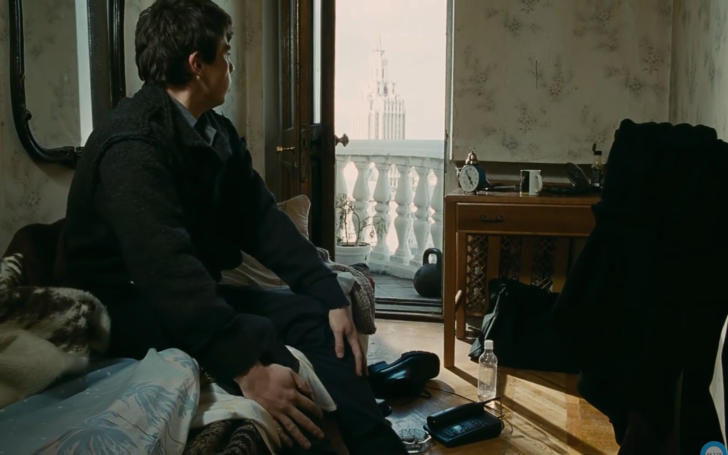 A frame from the movie “Brother 2”.

APARTMENTS IN A HIGH-RISE

Only two ads for the sale of apartments in a high-rise, both 2-room apartments, are posted on the CIAN real estate website. Some owners rent apartments for daily rent, but most, unsurprisingly, enjoy their home.

Interestingly, each room has access to a private balcony with a view of the courtyard and its own high-rise. The owners have kept both the stucco, and the “sockets” on the ceiling, and the doors in excellent condition. It is a pity that the wooden doors to the balcony and window frames have been replaced with plastic ones, but the parquet has been restored and looks like in the old days. A long narrow corridor unites an entrance hall, a separate bathroom, two isolated rooms and a cozy kitchen with built-in furniture and appliances. The ad states that the walls are ready for painting, and this is an undoubted plus.

This apartment captivates with a view from the balcony. Sitting on it and drinking coffee, you can admire not only your own house from a better angle, opening from the eighth floor, but also a piece of the city. The windows have also been replaced with plastic ones — but the doors to the balcony with panoramic views, and thanks to this much more light penetrates into the room. The parquet has been preserved only in places, but the stucco and “sockets” are untouched and look wonderful. In case the new owners decide to combine the kitchen with the living room, there is no load-bearing wall between them.