In this small studio apartment of the right proportions and configuration, an ergonomic, balanced space has developed. It seems to be filled with sunlight pouring from three panoramic windows. The interior, created to inspire a young creative nature, is bright, bold and free. Artistry, easy relaxation and even some carelessness are added to him by elements of boho aesthetics. 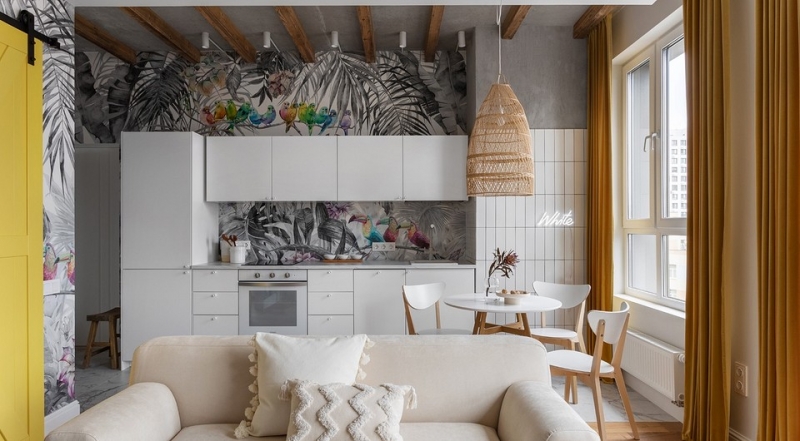 The customer was looking for an apartment to rent in order to leave it to his growing daughter later. The decisive factor when buying a home was the presence in the apartment of three large windows on the corner walls. Glazing gives an amazing feeling of spaciousness, visually increases the area. With a limited budget and a tight time frame, I wanted to get the most functional space with an isolated bedroom and a spacious kitchen-living room. The initial plan was to be implemented on a fairly modest 38.3 sq. m. meter. 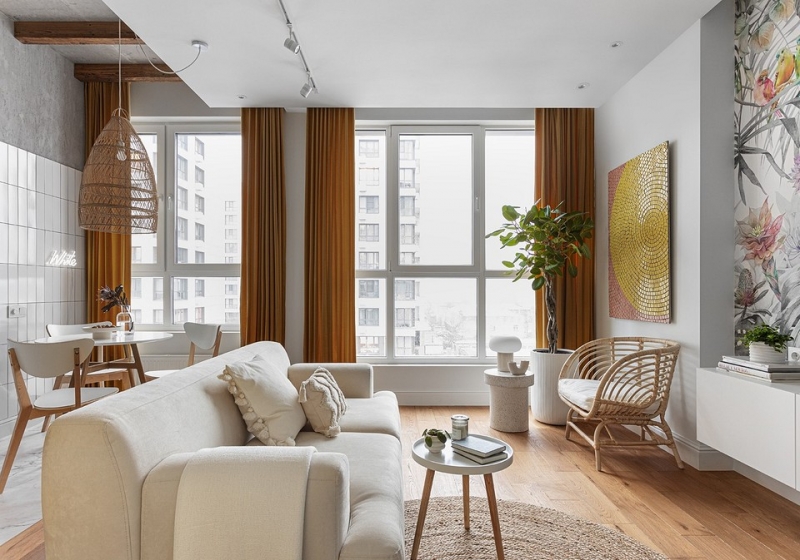 According to the developer’s plan, it was a studio apartment with a compact bathroom. For such an area, a studio layout is considered optimal, which is quite comfortable for one person to live in. However, the rectangular configuration of the apartment, and most importantly several panoramic windows allowed us to allocate space for a full-fledged bedroom. In the remaining space, a spacious living room was placed, combined with a kitchen of quite a familiar square footage. The author of the project did not have to compromise and sacrifice functionality for the sake of aesthetics or vice versa. The need for redevelopment has disappeared. The kitchen and bathroom remained in their places. 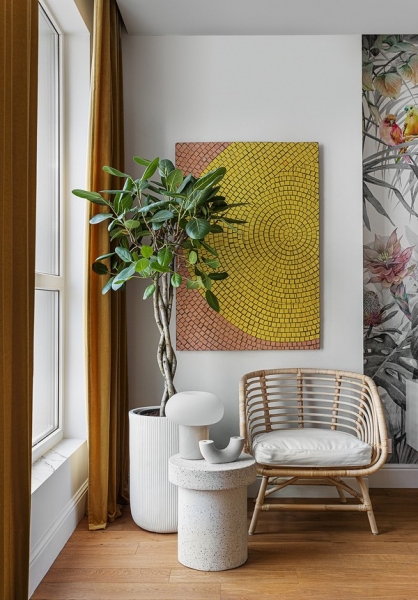 Only the partition separating the bedroom from the representative volume was erected. A bright yellow barn door closes the passage to the bedroom. Loops with rollers attached to its web move along the upper metal guide with stroke limiters. The canvas moves in the same plane with the wall. 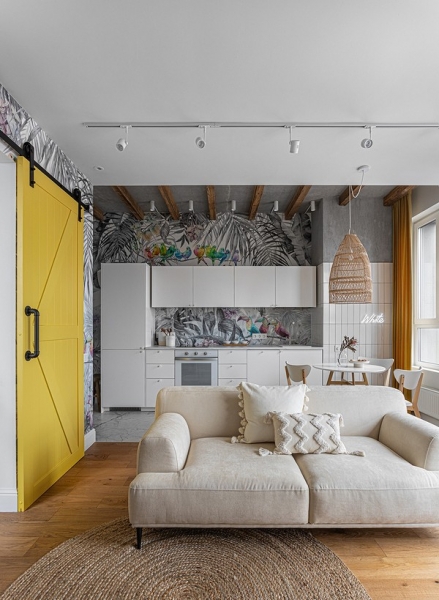 The wall between the entrance area and the kitchen was abandoned: a wide opening creates the illusion of the depth of the living space, and the flush-mounted door that leads to the bathroom is read as part of the wall.

Part of the interior partitions was erected by the developer. The new ones, provided for by the project, were made of pazogrebnevyh blocks.

The floors in all rooms were leveled with a screed, after which the floor coverings were laid: granite and engineering board. The lamellas of the latter are glued to the leveled and primed screed. This method of laying is more time-consuming than floating flooring, without rigid attachment to the base. However, a floor made of boards fixed with glue is not inferior in technical characteristics to a floor made of piece parquet, suitable for rooms of any size, withstands large temperature and humidity changes and serves for a long time. By the way, after a few years, the worn-out layer of wood can be sanded and re-coated with varnish or oil. 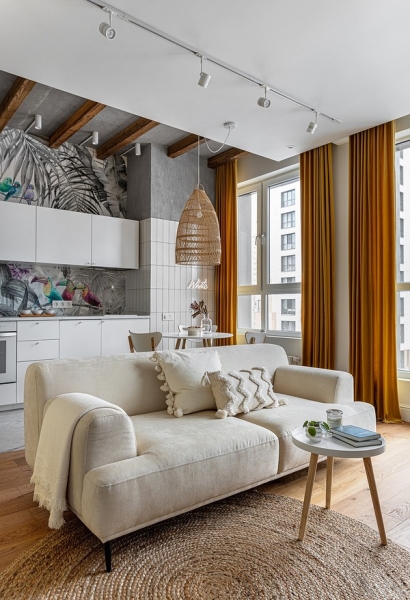 Windows and radiators were left. The ceiling was partially sewn up with drywall so that the air conditioner duct and electrical communications could be carried out. The remaining planes were covered with a water-based varnish and thus did not lose precious centimeters of height.

For example, the ceiling in the living room is lowered by 30 cm and sheathed with sheets of moisture-resistant drywall. Above the kitchen area, the ceiling is partially left in its original state as an untreated concrete slab. Its surface is covered with a colorless water-based varnish so that the concrete does not get dusty.

In the bathroom, due to the unsatisfactory quality of work and prolonged deadlines, it was not possible to make a self-leveling floor. So, the floor is lined with granite slabs and painted with a special wear-resistant paint. The table top with rounded corners on the pedestal is made to order from black marble of Rome. 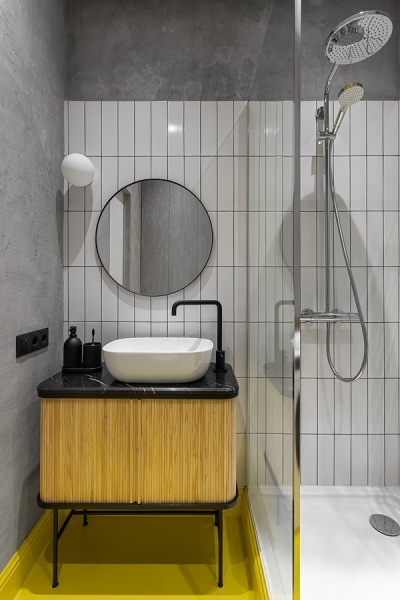 According to the project, the individual functional areas of the apartment differ and at the same time harmonize with each other. A large number of mirror surfaces and a light color scheme with a predominance of white and light gray shades helped to achieve this effect. Such a combination does not seem boring or cold, rather, on the contrary, it looks elegant and multifaceted. 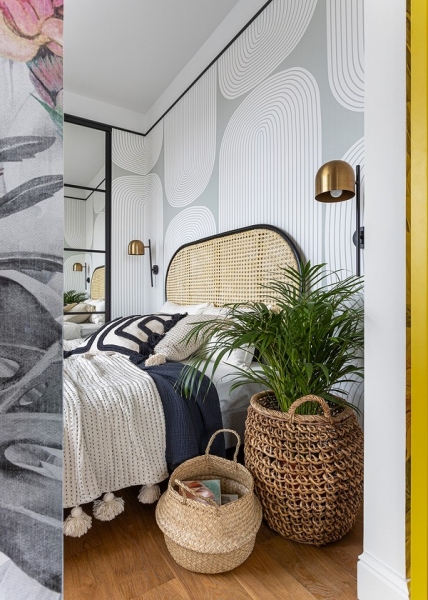 White is an excellent companion for any color, including a variety of shades of yellow, which are chosen as accents in this apartment. This is primarily a barn door, but also a decorative panel, a bathroom floor and blackout curtains covering panoramic windows. The engineering board on the floor looks powerful and elegant. Its natural texture echoes the natural wood of the ceiling beams and artisan art objects.

Separately, it should be noted the convenient organization of storage spaces.

The choice of a wardrobe for a small bedroom is explained by the fact that it is easy to embed it in places where serial cabinet furniture does not fit. Doors located in the same plane and moving away in different directions along the guides do not require additional free space, and mirror canvases seem to dissolve the cabinet in space, creating the illusion of spaciousness. A frame structure was chosen for the cabinet doors: the glass panels are enclosed in a metal profile along the contour. On the reverse side, the reflective surfaces are covered with a thin polymer film, which increases the strength and safety of mirrors. With a strong impact, the film does not allow the canvas to crumble into hundreds of small fragments. The mirror elements used in the wardrobe have no impurities of lead and aluminum and provide a smooth, volumetric reflection without distortion. 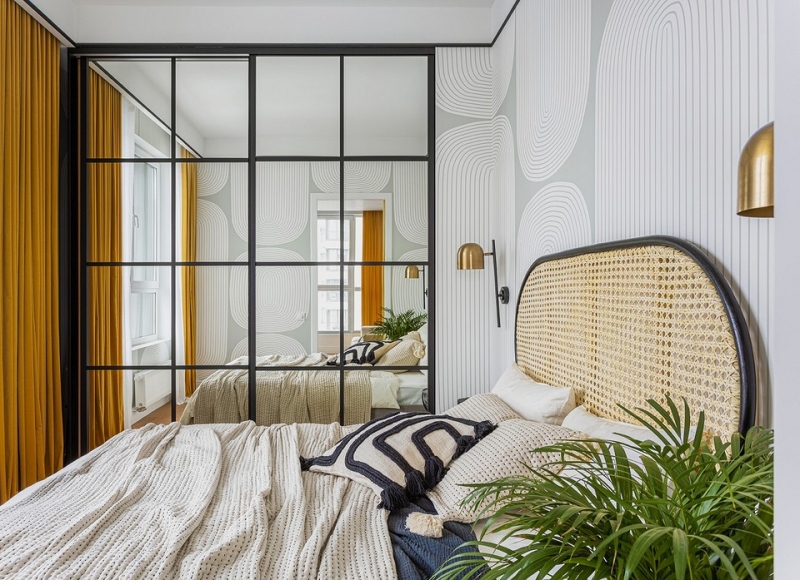 For outerwear, seasonal items, dimensional vacuum cleaner and ironing board, as well as compact other household accessories, a wardrobe is designed, placed on the wall opposite the entrance door. Its mirrored sashes contribute to an optical increase in the size of a modest hallway. 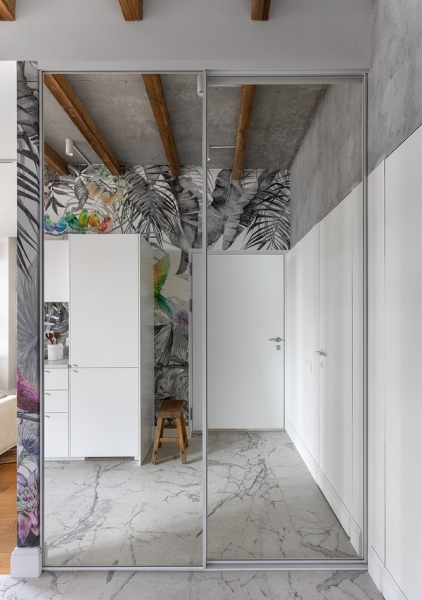 Kitchen furniture is assembled into a single extended composition from the entrance area to the communication riser, which gives the interior integrity. In the center of the residential composition is a voluminous sofa, which, on the one hand, serves as a border between the kitchen and the living room, and on the other, it is easy to bypass it from all sides. The situation pleases the eye with interesting mise en scenes.

The rejection of an oversized bathtub in favor of a shower corner allowed us to gain precious square centimeters in a combined bathroom. A compact washer-dryer and a boiler were installed here (for the duration of the hot water shutdown). 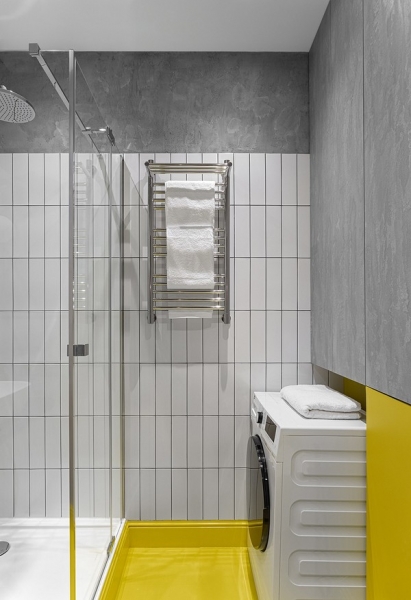 Textiles and decorative items wicker baskets, lampshade and headboard, hand embroidery on pillows and bedspreads, stools made of old boards fill the interior with a variety of textures. 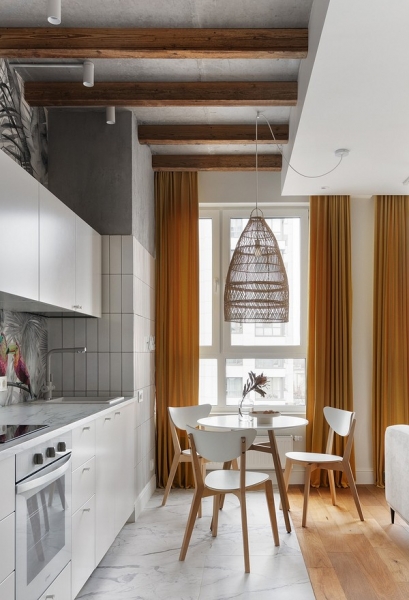 The central place on the wall of the combined kitchen-living room is occupied by a fragment of a mosaic panel of the 60s of the last century, before it decorated one of the walls of a weaving factory in Kolomna.

In the urban interior, the illusion of an easy resort life arises, which is measured not by the number of square meters, but by the holiday atmosphere and good mood.

When choosing the aesthetics of the interior, I always start from the sensations that a specific space and its surroundings give, including the style of a residential complex, district. For this reason, I don’t work remotely. It is important for me to read the necessary information, monitor changes in the repair and finishing process and make appropriate adjustments to the project. In everything that concerned aesthetics and colors, in the case of this interior, I was given complete freedom of choice. The apartment is very sunny: two of its windows face south, one to the west. Due to the large area of window glazing, the space is penetrated by sunlight. This is what formed the basis of the project. I wanted to give the interior a slightly resort look and, in contrast with the gray, overwhelming metropolis, make it frivolous and airy. 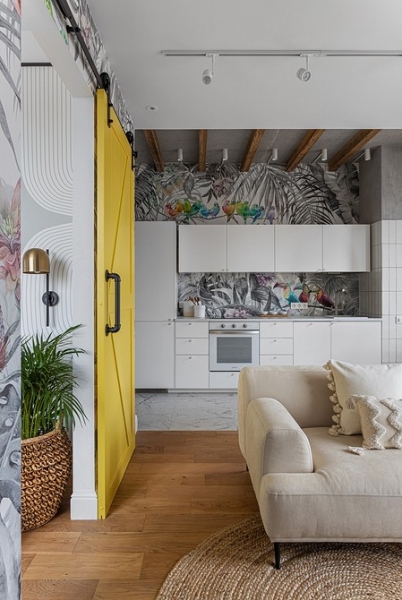 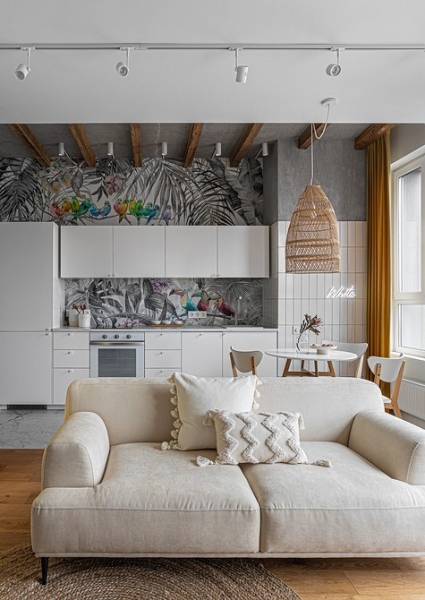 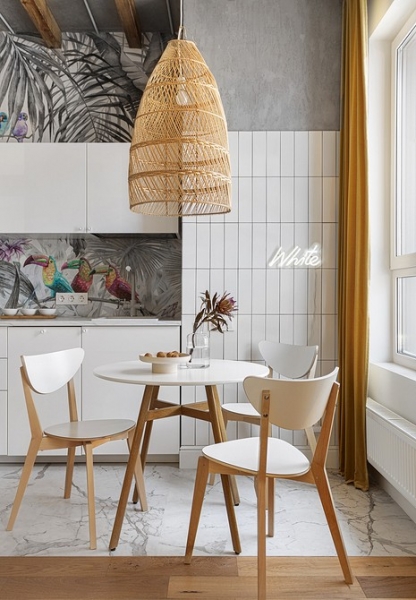 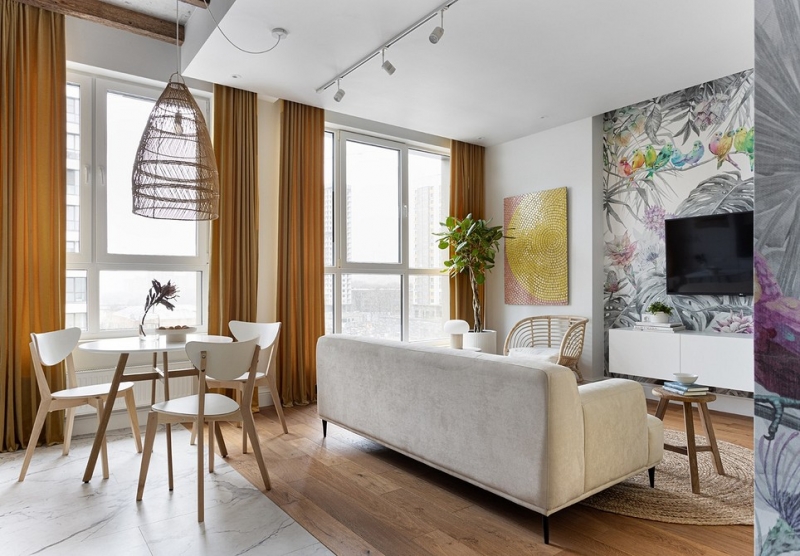 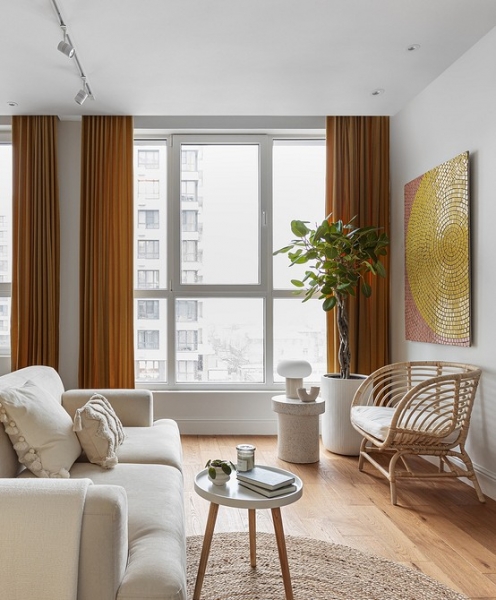 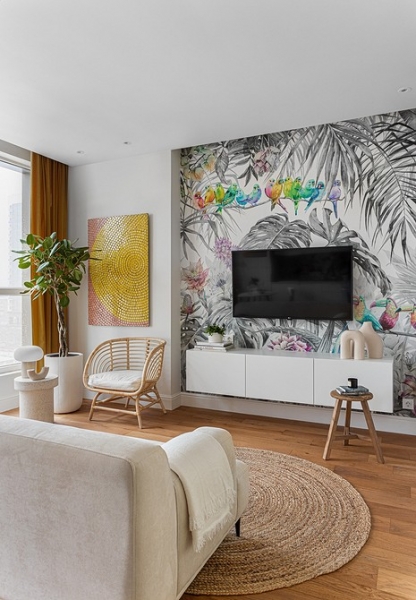 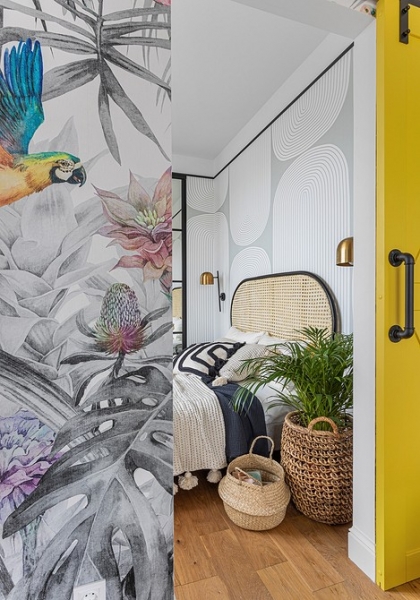 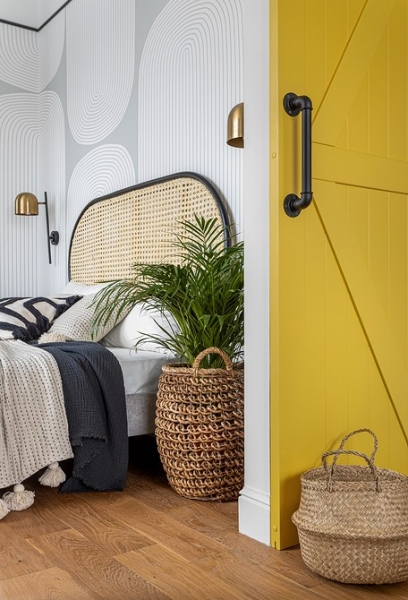 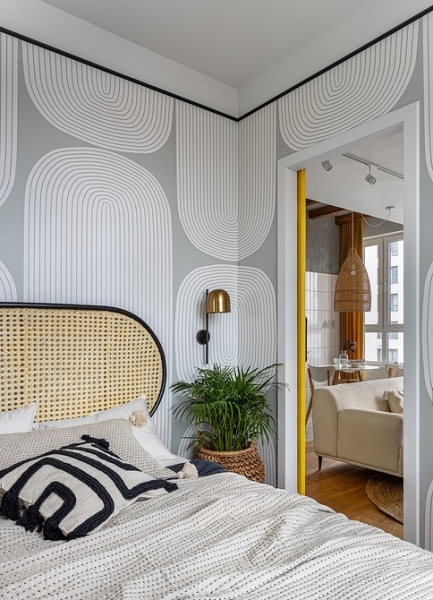 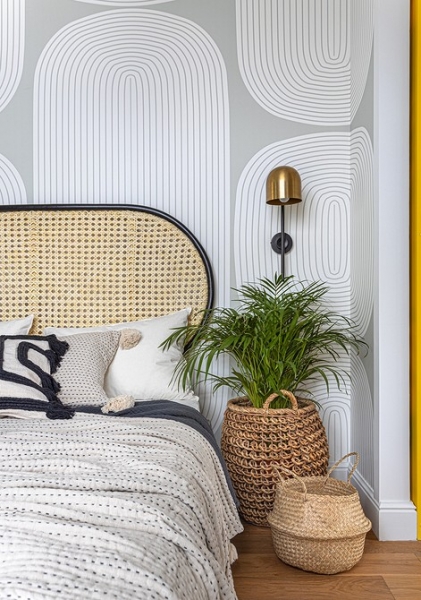 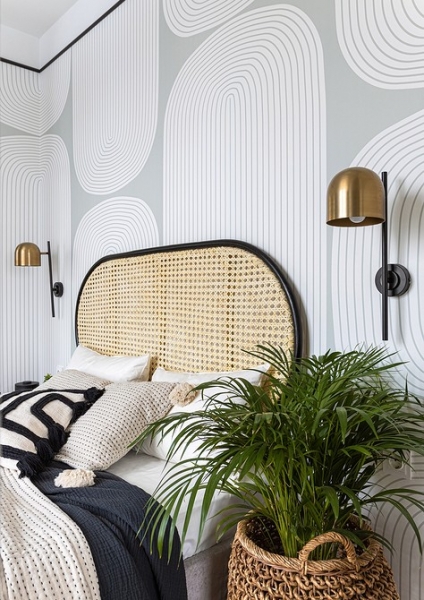 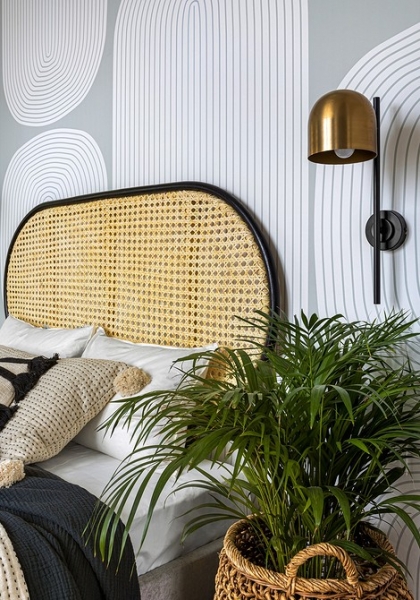 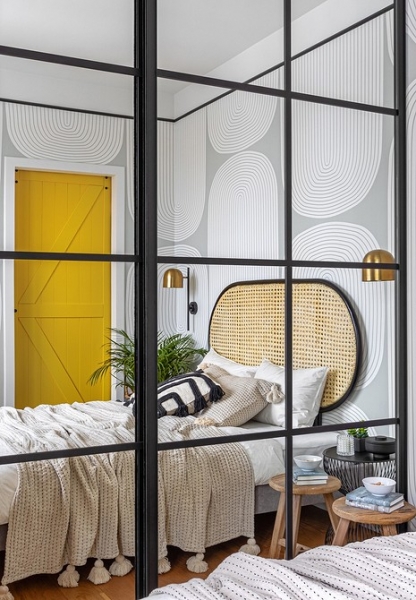 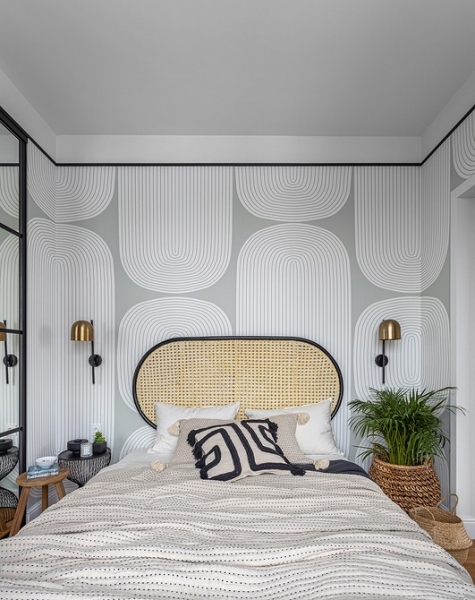 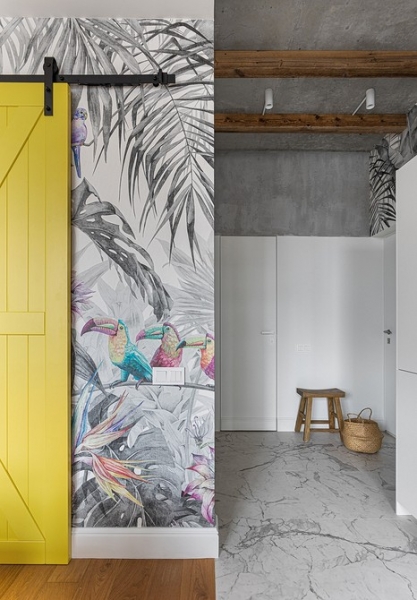 View of the hallway 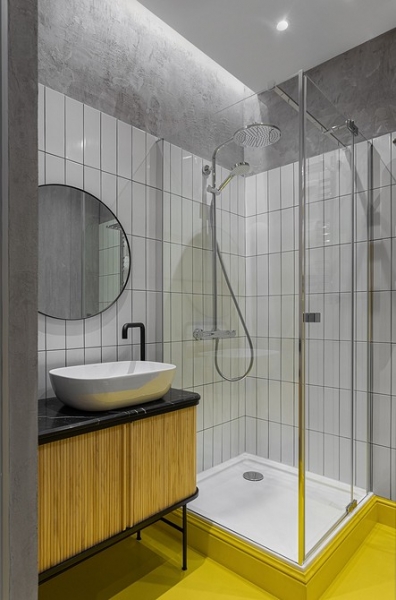 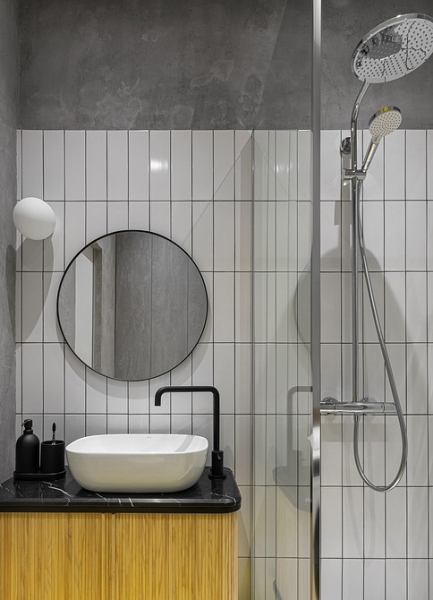 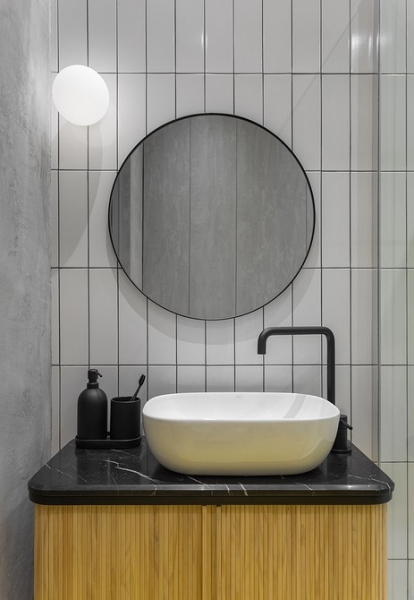 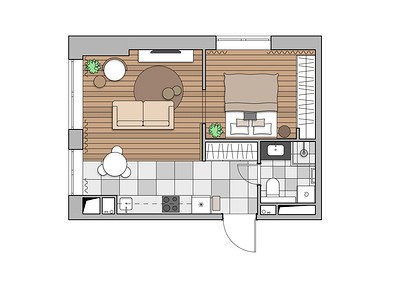